The Turkish president's comments come a day after Israeli Prime Minister Benjamin Netanyahu reiterated his intention to "apply sovereignty in a wise way in Judea and Samaria", calling parts of the West Bank by their biblical names.

In a televised address for the Muslim holiday of Eid al-Fitr on Sunday, Turkish President Recep Tayyip Erdogan threatened Israel over its new government's plan to claim parts of the West Bank.

"We are witnessing a new plan of occupation and annexation by Israel that threatens Palestinian sovereignty and is contrary to international law", Erdogan said, adding Turkey is the "only voice defending the Palestinians today".

The Turkish head of state went on to assert his country "won’t allow the transfer of Palestinian land to anyone", denouncing the current "world order":

"The world order has let down the Palestinians, and has not successfully brought peace, justice, security, and order to this part of the world".

He referred to Jerusalem and the Temple Mount as the location "holy to three religions" dubbing it "the red line" for Muslims worldwide.

At a meeting behind closed doors with MKs on Monday, Israeli Prime Minister Benjamin Netanyahu reiterated the July date set out in the country’s newly inaugurated coalition agreement for kickstarting the process of extending sovereignty, and made it clear to his Likud lawmakers he has no intention of backtracking on the decision.

"We have an opportunity that hasn't existed since 1948 to apply sovereignty in a wise way and as a diplomatic step in Judea and Samaria, and we will not let this opportunity pass", Netanyahu was quoted by the Times of Israel as saying. In his comments, he brought up the year when the State of Israel was established and opted for the biblical names to refer to the West Bank territory.

These were the first public comments made by the Israeli prime minister since he appeared in court Sunday as litigation in three corruption cases brought against him kicked off. 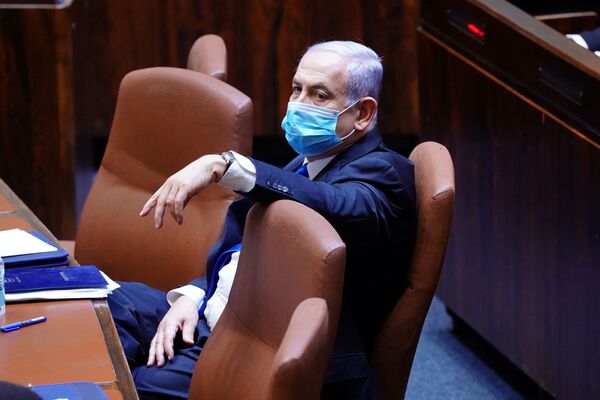 Israeli Prime Minister Benjamin Netanyahu wears a mask during a swearing in ceremony of his new unity government with election rival Benny Gantz, at the Knesset, Israel's parliament, in Jerusalem May 17, 2020.
© REUTERS / Adina Valman/Knesset Spokesperson's Office/Handout

Under the coalition deal between Netanyahu and Blue and White's Benny Gantz, the defence minister, the prime minister can pursue his West Bank plans. The complex deal clinched last month with Gantz stipulates that the prime minister can bring up his formal proposal vis-a-vis the settlements there on 1 July, and at that point, approval from either the Cabinet or the Knesset will be required.

Netanyahu's plans are in accordance with the Middle East plan unveiled by the US administration back in January, which okays extending Israeli sovereignty over roughly 30 percent of the West Bank.

However, the entire peace plan, to a great extent overshadowed for the past few months by the raging coronavirus pandemic, has been rejected by the Palestinians, who regard the West Bank as the territory for a future Palestinian state.

Palestinian Authority President Mahmoud Abbas last week announced that he was severing all security ties with Israel due to Netanyahu's declared intentions.