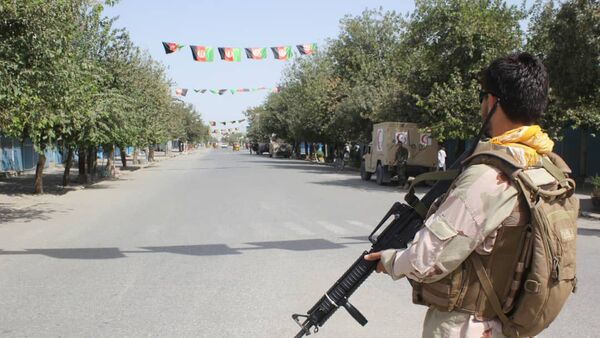 MOSCOW, (Sputnik) - The power-sharing deal between Afghan President Ashraf Ghani and his rival Abdullah Abdullah will strengthen the government's bargaining power in talks with the Taliban but is not enough to bring peace to the country, experts say.

The long-time political rivals agreed to share power in the government on Sunday after months of feuding over the results of last September's election. Ghani was awarded the victory but Abdullah rejected the outcome and formed a parallel cabinet.

Hopes are that the newly found unity will help the Afghan government get the country back on track toward stability. Abdullah will now lead negotiations with Taliban insurgents that aim to end decades of fighting as the country struggles to contain the coronavirus outbreak.

The power-sharing deal will likely strengthen the government's hand in the future talks with the Taliban but it cannot resolve the current stalemate, Marvin Weinbaum, the director for Afghanistan and Pakistan Studies at the Washington-based Middle East Institute, said.

"Certainly, without a deal the government side would find itself in a decidedly weak bargaining position. But while the compromise deal may serve the need for the unity needed by the Afghan regime, it has not in any substantial way removed the obstacles that block progress toward reaching a peace agreement with the Taliban," he said.

The deal is unlikely to change the Taliban's perception of the Afghan government as a US "puppet," while Ghani's decision to resume the offensive against the militants after the hospital and funeral attacks — most likely carried out by the affiliate of Daesh* (also known as ISIS/IS/Islamic State, banned as a terror group in Russia) — could be another setback to the peace process.

Jabeur Fathally, a professor of international and comparative law at the University of Ottawa in Canada, said the Afghan president and his top negotiator apparently put their rivalry aside to avoid armed clashes between their supporters but their core differences remained and could be exploited by the Taliban.

"This agreement will calm and ease the tension between the supporters of these two personalities and will certainly allow the resumption of dialogue with the Taliban but we will see in the next few months that the two personalities will not have the same agendas, objectives and strategies towards the Taliban," Fathally said.

Taliban Announces 3-Day Ceasefire as Eid Holiday Begins
The expert warned that insurgents will try to play on the simmering tensions between the two political heavyweights to weaken them and impose their conditions in the intra-Afghan negotiations.

Robert Jervis, a professor of international politics in the Department of Political Science at Columbia University in New York, said that infighting between the two Afghan leaders could reemerge later in the negotiating process to the detriment of the peace efforts.

"Having Abdullah lead the delegation in negotiations with the Taliban may (slightly) increase the chance of reaching an agreement by giving multiple factions in the government incentives to work out a deal. The danger, of course, is that Ghani will be given reason to object to anything that Abdullah puts forward," he said.

What About the Pandemic?

The power-sharing agreement is likely to boost the government's response to the coronavirus epidemic, which has infected almost 10,000 people and killed more than 200 across Afghanistan.

"The agreement allows for a coordinated public health response to the pandemic that was not possible under the backdrop of a political infighting that had distracted the government from focusing on the health challenge," Marvin Weinbaum said.

Weinbaum added that mounting a successful campaign to contain the spread of the disease would be "exceedingly difficult" without a nationwide ceasefire with the Taliban, whose efforts to address the epidemic in areas under their control have been limited at best.

Jabeur Fathally said the deal was not going to change a lot in Afghanis' daily life but would allow the Afghan government to have more access to international relief aid, particularly from the United States and the European Union.