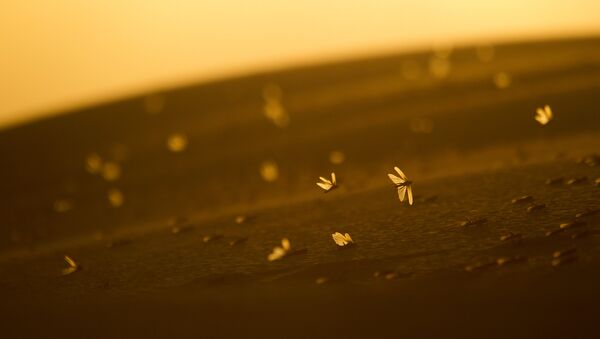 New Delhi (Sputnik): Agricultural land has already been inundated in Indian states which share a border with Pakistan, which has also found itself grappling with an infestation. Swarms of locusts commonly number 40 million; the insect is known to cause major damage by attacking crops.

The government of India's most populous state Uttar Pradesh, headed by Yogi Adityanath, has kicked off an awareness campaign for farmers to protect the sugarcane crop from locusts and grasshoppers. Farmers are being asked to spray pesticides if they find a locust in the field and beat drums so that the bugs flee, since the insect is believed to be afraid of noise.

All the departments of the state and the scientists at its Sugarcane Research Centres have been asked to conduct an awareness campaign by paying regular visits to villages in the state, which is home to more than 204 million people.

Uttar Pradesh Sugarcane Commissioner Sanjay Bhoosreddy in a statement said: "We are distributing pamphlets and handbills and seeking help from newspapers to make farmers aware of the problem. We are asking farmers to spray pesticides as soon as they find locusts in the fields. They should also inform the concerned officials so that we can prevent the attack."

According to the official statement, all the officers and employees of the department have been told to visit the villages regularly and make the farmers aware of the problem.

Recently, hundreds of thousands of hectares of crops were damaged in Indian states of Gujarat and Rajasthan, which witnessed a locust attack - both states share a border with Pakistan. Pakistan suffered one of its worst locust attacks early this year, and went on to declare a national emergency.