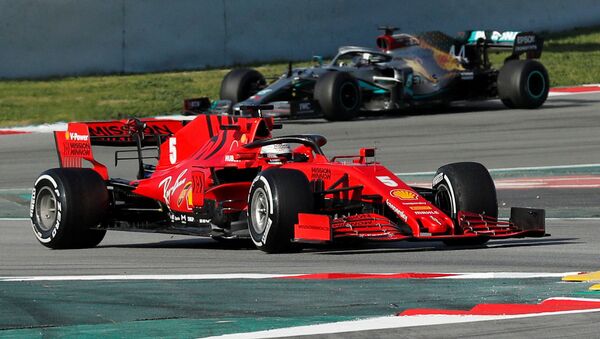 Max Verstappen, the wonder kid on the F1 Red Bull Racing team, recently admitted that it’s far more likely that McLaren’s Carlos Sainz will end up filling the newly emptied seat on Ferrari’s 2021 roster than anyone else.

Speaking during an Instagram Q&A session with retired racing driver David Coulthard, Verstappen jumped on the subject, telling the Scottish driver-turned-presenter that he expected Sainz to take the seat over his former Red Bull teammate Daniel Ricciardo.

"I guess also very soon we’ll find out who the replacement is going to be,” the 22-year-old racer said during the livestream. Verstappen has a secured contract with Red Bull until the end of the 2023 season. “It’s definitely not me, I can tell you. I’m at Red Bull. I saw some questions coming along if I was going to Ferrari, but I’m not."

“I think it’s not going to be the Italian-sounding name … It's just a guess. We'll have to wait and see,” he added.

Ricciardo and Sainz, both former teammates of Verstappen in earlier racing seasons, have been speculated to be the top two contenders for the Ferrari seat; however, Ricciardo has repeatedly indicated that he intends to stick with the Renault racing team for the long term.

As for Sainz, the rumor mill has suggested that the Spaniard will be ditching the British motor racing team for the likes of the prancing horse. Motorsport Italia’s Franco Nugnes recently speculated that Sainz is likely to confirm the switch sometime in the next 48 hours.

Both Ricciardo and Sainz will be out of contracts with their current teams at the end of 2020.

A spike in speculation regarding the Ferrari team came early Tuesday after Ferrari confirmed that four-time F1 world champion Sebastian Vettel would be parting ways with the team and not renewing his seat for the upcoming season.

"My relationship with Scuderia Ferrari will finish at the end of 2020,” Vettel said in a statement. “In order to get the best possible results in this sport, it’s vital for all parties to work in perfect harmony.”

“The team and I have realized that there is no longer a common desire to stay together beyond the end of this season. Financial matters have played no part in this joint decision. That’s not the way I think when it comes to making certain choices, and it never will be.”

Mattia Binotto, Ferrari’s team principal, further underscored in a statement of his own that there “was no specific reason that led to this decision, apart from the common and amicable belief that the time had come to go our separate ways in order to reach our respective objectives.”

Vettel joined Ferrari in the 2015 season after winning four driver’s championships with Red Bull. The 2019 season was reportedly riddled with internal contention for Vettel following the signing of up-and-comer Monégasque racing driver Charles Leclerc, who has a contract with Ferrari until the end of 2024.

However, despite the rocky relationship between the pair, Leclerc addressed Vettel’s departure on social media, tweeting, “It’s been a huge honor for me to be your teammate.”

"We've had some tense moments on tracks. Some very good ones and some others that didn't end as we both wanted, but there was always respect, even though it wasn't perceived this way from the outside,” he wrote. "I've never learnt so much as I did with you as my teammate. Thank you for everything Seb."

Although it’s unclear what next steps Vettel will take, some reports suggest he may go to Renault or McLaren. It’s anyone’s guess at this point, as the tight-lipped German has yet to address his next moves.