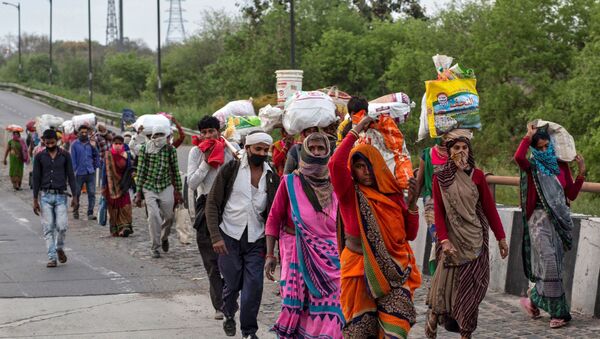 © REUTERS / Danish Siddiqui
Subscribe
International
India
Africa
New Delhi (Sputnik): The Indian Government ihad announced in late April that it would run special point-to-point ‘Shramik’ trains to ferry the migrant labourers, tourists, students and stranded people due to the lockdown. According to the state governments, there are around 10 million stranded workers across the country.

Expressing concern over the situation of helpless migrant workers heading towards their hometowns along roads and railway tracks, the Government of India has asked its States and Union Territories to provide them food, shelter and ensure they don't have to walk.

Taking note of migrants workers with “great concern”, in a letter to all states of the country, the central government instructed: “Since their movement by buses and special trains has already been allowed to enable their travel to their native places, all states and union government should ensure that migrant workers do not resort to walking on roads or railway tracks.”

If workers are found walking along the roads or railway tracks, they should be counselled, taken to nearby government shelter homes and provided with food and water “till such time as they are facilitated to board the special trains or buses to their native villages”, the government has conveyed to the state authorities.

The states have also been urged to co-operate with railways to run more trains so that stranded workers are dealt with more quickly.

“The government urges to allow the reception of all special trains without any hindrance and facilitate the faster movement of stranded migrant workers to their native places,” the central government stated in the letter.

Ever since the national lockdown was implemented on 25 March, millions of migrant workers have been left jobless – without work, food, money or even shelter.

With all the transportation shut down, hundreds of thousands of them along with their women and children, have started walking homeward in different states, often hundreds of miles away. Initially, several incidents where migrant workers have been stuck at the state borders has also came to light.

Amid mounting public outrage, all the state governments were directed to provide shelter and food to the migrant labourers while ensuring social distancing, while watching out for possibility of virus transmission.

In a recent tragic case, as many as 17 migrants were crushed to death under a goods train in the middle of the night in Maharashtra state. It was later discovered these people had become exhausted after walking a long distance on the tracks in a bid to reach the station to catch a train to their native village and had stopped to rest.

In another incident, at least five migrant workers died and 13 others were injured after a truck they were travelling in overturned on a highway in Madhya Pradesh state on 9 May.