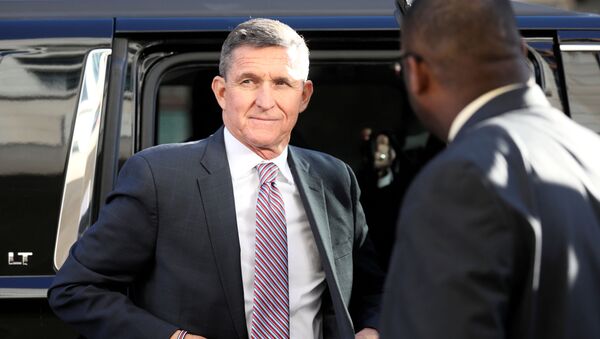 The document commences by noting Covington has already been twice ordered by the Court to search its records and provide Flynn with all documents pertinent to his case, in order to allow his new legal representation - headed by Sidney Powell - continue his legal defence.

In a new court filing, Michael Flynn’s legal team have asked the presiding judge in his case to compel Covington & Burling, previously legal counsel to the National Security Adviser, to hand over all files relating to their former client.

“It has been almost a year since Mr. Flynn terminated Covington, and over nine months since this Court issued its first Minute Order, on 16th July 2019. In that first Order, [the] Court emphasized Covington’s duty to promptly transfer the file regarding Flynn’s case to successor counsel. On 25th July 2019, Covington certified its transfer of  Flynn’s ‘case file’ to new counsel was ‘complete’ and its transfer constituted ‘the entirety of the working case file shared by lawyers engaged on the matter’,” it states.

​However, while Flynn’s new defense team took Covington at its word - having handed over numerous hard drives and over a million pages of documents - on 9th April 9 this year Covington alerted Flynn’s new legal team it was transferring more documents, including 30 new pages of case production the firm claimed to have previously overlooked.

“This supplemental transfer - it was to be the first of three - included internal emails discussing case strategy and two pages of handwritten notes, one of which is relevant to the crucial lawyer-client dispute that [arose] in the interim. That precise dispute is the foundation for Mr. Flynn’s Supplemental Motion to withdraw his guilty plea. On 28th April Covington announced a second supplemental transfer of ‘overlooked’ documents. Remarkably, this second transfer contained 6,756 documents, consisting of some 18,960 pages,” the filing continues.

Also on 28th April, the Court is said to have issued a further minute order, directing Covington to immediately transfer all documents or communications concerning the firm's representation of Flynn not previously transferred, with a deadline of 4th May. Covington finally  Covington made a third transfer of documents 2nd May, comprised of 75 pages, some of which were duplicate copies of material Flynn’s new counsel had already seen, but with notations by Covington lawyers, and 32 pages of handwritten notes not previously produced.

After Years of Hiding Emails From ⁦@GenFlynn⁩

Covington Law Firm Where Holder #ObamasWingman Is A Partner

​On 4th May, Covington filed a notice of compliance with the court order, “full of lame excuses and obfuscations for its unilateral determination not to comply” with the court’s order.

“Despite its purported compliance, Covington’s submission is rife with admissions it has not complied and will not comply…At worst, Covington is attempting to convince this Court to accept compliance with an order the Court did not issue. At best, Covington is seeking clarification of the Court’s actual order to excuse its non-compliance,” the filing alleges.

Tantalisingly, the filing suggests Flynn hasn’t been provided with “all the notes, records, communications, and phone records of all the partners who consulted or worked” on his case, including Eric Holder (US Attorney General 2009 - 2015), Lanny Breuer (Assistant Attorney General for the Criminal Division of the US Department of Justice 2009 - 2013), and Michael Chertoff (second US Secretary of Homeland Security 2005 - 2009. While not officially assigned to Flynn’s case, the trio are prominent partners at Covington and are mentioned in several documents already turned over to Flynn’s new legal team.

Moreover, Chertoff met with Flynn, is “copied in on many emails about the case”, and was an “active member” of the defense team. Consultations with Breuer are also mentioned in documents dating to “crucial times” during the period Covington represented Flynn - February, March, April, August and November of 2017. Most strikingly of all though, Holder is said to have “appeared briefly” at a client conference, communicated about the firm’s representation of Mr. Flynn, and made Twitter posts “that were a significant problem for the defense and were discussed within the firm”.

Does anyone view Mueller now as anything but in on the coup? He dodged every single question that would have shed light on the plot. He wasn’t going to talk about Svetlana because she was a target they needed to destroy to eventually destroy Flynn. These are sick criminal minds.

​The filing concludes by noting Covington “is no stranger to litigation” and “regularly makes discovery requests of adverse parties”.

“While sifting through documents might not be pleasant, it’s hardly unusual in litigation. Here, the stakes are much higher than a civil case. [Flynn] is alleging his freedom is at stake in many ways because of his former lawyers’ malfeasance and misfeasance. Evidence of that will prove his right to withdraw his plea and correct an egregious injustice he would not have suffered had he been represented by unconflicted counsel unafraid to advocate zealously on his behalf…Covington’s attribution of its belated production of 18,960 pages to some kind of technical oversight strains credulity. This is one of the most important cases in the country’s history. Because Covington has proven unreliable in collecting and producing documents itself, the Court should require that the firm, at its own expense, provide current counsel for Mr. Flynn with direct access to its e-discovery vendor so that Mr. Flynn can ensure accountability in the collection and production process,” it states.