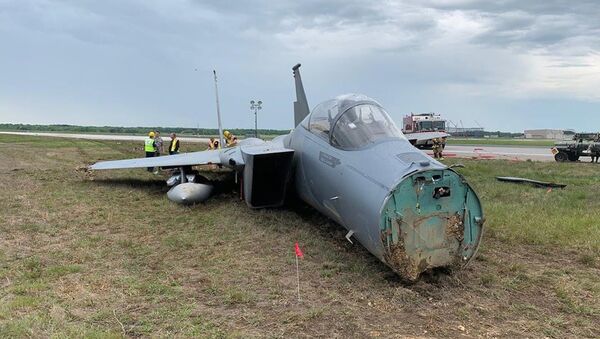 US President Donald Trump spent "a working weekend" at Camp David, meeting close advisors to come up with a plan on boosting the nation's economy as it suffers a striking downturn in the wake of the coronavirus crisis.

An F-15 aircraft, reportedly protecting Trump during his "working trip" to Camp David, made an emergency landing at Joint Base Andrews in Maryland following an undisclosed in-flight distress event, according to Fox News.

A statement from an airbase spokesperson, cited by Fox News, said that the aircraft from the 142nd Fighter Wing was on the "Operation NOBLE EAGLE" mission for the North American Aerospace Defense Command (NORAD) when it diverted to the base around 1:30 p.m. Saturday. No details of what caused the emergency landing were given.

"The aircraft's landing gear malfunctioned and the aircraft came to rest on its fuselage. There were no injuries to the pilot and runway operations have been unaffected", the statement reportedly said.

The spokesperson also said that an investigation into the incident is ongoing.

Trump's "working weekend" at Camp David involved meeting a small group of trusted aides including Chief of Staff Mark Meadows as well as daughter and adviser Ivanka Trump to discuss measures to restore the US economy affected by the ongoing coronavirus.