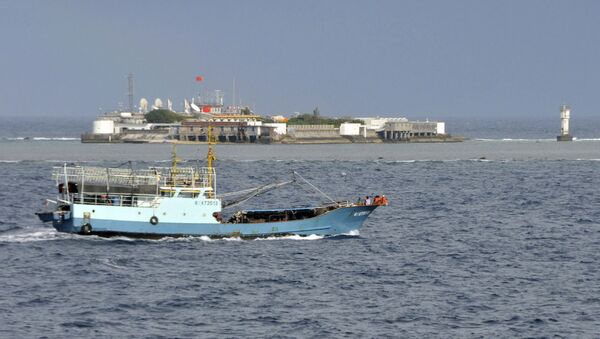 Beijing is crying foul after writers at a US Navy-connected think tank proposed a return to the 18th century, reviving the ancient practice of awarding privateers letters of marque to prey on foreign vessels. The proposal aims to turn the tide in the contested South China Sea against numerically superior Chinese maritime fleets.

In the April edition of its magazine Proceedings, two writers at the US Naval Institute, a nonprofit group connected to the US Naval Academy, floated the idea of Congress issuing letters of marque to private ships, authorizing them to prey on Chinese maritime vessels in a bid to turn the tide against Beijing in the South China Sea.

“Unleash the Privateers! The United States should issue letters of marque to fight Chinese aggression at sea,” write authors Brandon Schwartz and Mark Cancian, the latter of whom is a retired US Marine Corps colonel.

“Privateering, authorized by letters of marque, could offer a low-cost tool to enhance deterrence in peacetime and gain advantage in wartime,” the duo argues. “It would attack an asymmetric vulnerability of China, which has a much larger merchant fleet than the United States. Indeed, an attack on Chinese global trade would undermine China’s entire economy and threaten the regime’s stability. Finally, despite pervasive myths to the contrary, US privateering is not prohibited by US or international law.”

In reply to this and another, similar article published in the magazine, Chinese Ministry of National Defense spokesperson Senior Colonel Wu Qian denounced the proposal as “an act of piracy.”

"These actions are criminal activities explicitly prohibited under international laws, and will absolutely receive joint opposition and severe backlash from the international community," Wu said in a Thursday statement, China Daily reported.

Wu further said that the proposal exposed the hegemonic ideas and law-of-the-jungle mentality of the authors, "and the international community should be on guard against these thoughts.”

According to Schwartz and Cancian, challenging the People’s Liberation Army Navy (PLAN), a numerically superior foe, on its home turf in a fair fight is a daunting task for the US Navy, so adopting privateering would be cost effective for swelling Pentagon budgets as well as effective against Chinese forces as a type of asymmetric warfare.

As both example and justification, they note the massive use of privateering during the War of 1812, which the United States fought against the British Empire between 1812 and 1814, during which the Royal Navy vastly outsized the infant US Navy. However, they curiously forget to note that it was privateering that drew the US not only into that war, but also its war against North African corsairs in the employ of the Ottoman Empire the decade prior.

In a separate article published in the same April edition of Proceedings, Schwartz expanded on the debate, arguing that modern international legal precedent establishes that privateers are not mercenaries and that existing treaties would protect privateers if they were citizens of the country that issued the letters of marque.

This, in effect, makes them not a privateer in the classic sense, but something akin to a paramilitary force, like a militia. China actually employs something somewhat similar: a maritime militia of some 200,000 fishing boats that can double as an informal naval force in times of war. However, when it comes to that example, US naval strategists have repeatedly cried foul.

The key difference between the two types of militias is that China’s operates only within its own claimed territory - Washington has never claimed any part of the South China Sea for itself, and Schwartz and Cancian envision privateers as an offensive force, while Beijing has laid out historical claims to the waterway and believes the actions of the maritime militia, including chasing away foreign fishing boats, to be defensive in nature.

James Kraska, a professor and research director in the Stockton Center for the Study of International Law at the US Naval War College, wrote in The Diplomat in August 2015 that the maritime militia was “an inexpensive force multiplier,” but noted it blurs the distinction between civilians and military forces in dangerous ways.

Kraska warned that the militia "may make fishing vessels lawful targets during armed conflict, with potentially tragic consequences for legitimate fishermen from China and nearby states," calling this a "perversion of legal concepts or processes to counter an opponent."

"The maritime militia exploit seams in the law and thereby place at risk the very civilians that the law is made to protect," the expert wrote.

Likewise, Andrew Erickson, an associate professor at the US Naval War College, told Defense News in a November 2015 interview that "China is trying to use these government-controlled fisherman below the radar to get the bonus without the onus to support its South China Sea claims.”

On the other hand, in February 2019, then-Chief of US Naval Operations Admiral John Richardson told the Atlantic Council think tank that the maritime militia lay within so-called “gray zones” not clearly governed by the United Nations Convention on the Law of the Sea or the US Navy's Code of Unplanned Encounters at Sea. He called for the two nations to draw up formal rules of the road, so as to avoid the unpredictability of encounters between the maritime militia and US naval forces.