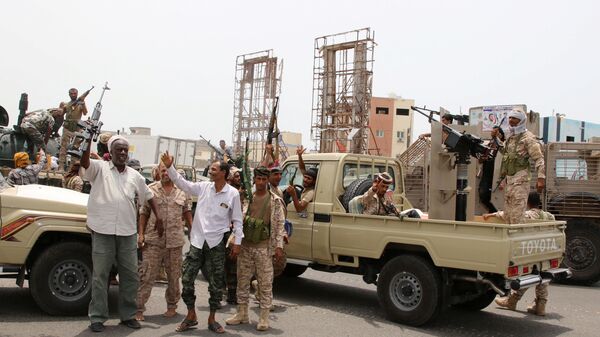 Yemen's southern separatists announced self-rule in the port city of Aden and nearby provinces after accusing the Yemeni government of failing to implement provisions of their power-sharing deal.

Saudi Arabia says conditions in Yemen's port of Aden and some southern provinces should return to how they were before a state of emergency was declared by the Southern Transitional Council (STC), the Saudi Press Agency reported on Tuesday, citing the Kingdom's cabinet.

Last Saturday, the Aden-Based STC movement, created by the rebels back in 2017, introduced self-governance in the country's southern provinces, declaring a state of emergency in the region and tasking the armed forces under their control with implementing it. Nonetheless, several southern provinces refused to support the council's decision.

In November 2019, Yemen's government, headed by President Abdrabbuh Mansur Hadi, signed a peace deal with the STC aimed at putting an end to the military confrontation. Apart from other provisions, the agreement envisioned secessionists returning facilities and state institutions, which they had previously seized in Yemen's south, to the government.

The STC was created in 2017. The secessionist movement is backed by the United Arab Emirates, which is part of the Saudi-led coalition that has launched an air campaign against the Houthi rebels in Yemen.

On April 8, the coalition announced that it would cease operations in Yemen for a 14-day period in response to the call by the United Nations for a global ceasefire amid the coronavirus pandemic. However, since then, the Houthi movement and the coalition have repeatedly accused one another of violating the truce.