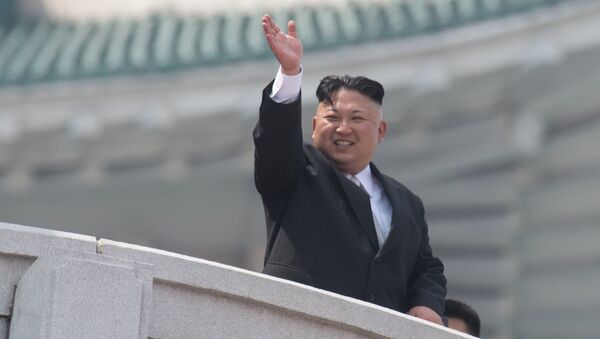 © Sputnik / Iliya Pitalev
/
Go to the photo bank
Subscribe
The minister argued that Kim has dropped out of sight on at least two occasions since mid-January, which could hardly be considered unusual amid the current coronavirus situation.

As Kim Jong-un's absence from the Day of the Sun celebrations on 15 April, which honored Kim’s grandfather and DPRK founder Kim Il-sung, sparked a wave of rumors about the North Korean head of state's alleged demise, South Korea's Unification Minister Kim Yeon-chul suggested that the situation may have something to do with the current coronavirus crisis.

While North Korea has so far reported zero COVID-19 cases, the minister argued that due to the steps the country took to stave off a possible outbreak, Kim's absence from the event could hardly be considered unusual.

"It is true that he had never missed the anniversary for Kim Il Sung’s birthday since he took power, but many anniversary events including celebrations and a banquet had been cancelled because of coronavirus concerns," Kim Yeon-chul said at a parliamentary hearing.

The minister also claimed that there were at least two instances since mid-January when Kim disappeared from the public eye for nearly 20 days, which probably shouldn't be considered “particularly unusual given the current (coronavirus) situation."

Previously, a North Korean defector told a South Korean media outlet that Kim skipped the ceremony "because there was a problem within the Supreme Guard Command in charge of guarding North Korea’s top leader", claiming that there's been a coronavirus case among Kim's bodyguard team which might've put the North Korean leader himself at risk of being infected.