Anganwadi Workers: How Indian Women Warriors Are Leading the Fight Against COVID-19 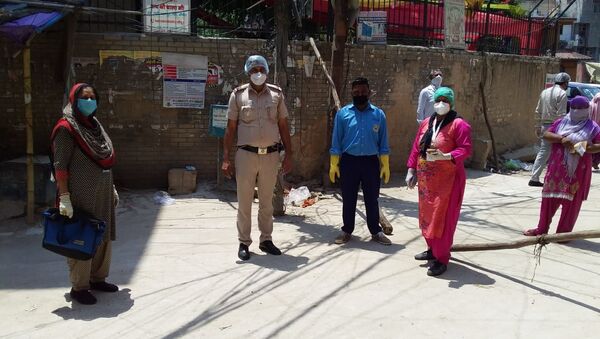 Pratibha Sharma
Sputnik correspondent
All materialsWrite to the author
New Delhi (Sputnik): Indian government’s COVID-19 relief operations on ground have been sporadically marred by attacks on healthcare workers carried out by locals who are either fearful, suspicious or sometimes have vested interests. Here a vital role is played by India’s ‘women army’ of Anganwadi workers, whose biggest weapon is mutual trust.

A million-plus Anganwadi workers, along with the rural health workforce - the local ASHA (Accredited Social Health Activists) - have been roped in to assist the government’s drive to thwart the spread of COVID-19 in India.

These are female workers who, on an ordinary day, are the backbone of India’s battle against undernutrition and its rural healthcare under the government’s welfare programmes.

​But now they are part of a door-to-door campaign to record people’s travel history, note flu symptoms and trace positive cases and their contacts, majorly in COVID-19 hotspots. Along with that, they are providing food relief to children and the needy.

“When we reach out to people in our jurisdiction, they see a familiar face. They do not feel suspicious and hence cooperate with us and accept food relief,” Sunita Rani, who is working in one of the COVID-19 hotspots in Delhi, tells Sputnik.

Sunita added that their job is to visit the houses of COVID-19 positive patients and inform their immediate contacts to get tested for the infection.

“When a positive contact is found we screen the nearby areas - up to 500 metres. Once we were informed that a person has tested positive and he lived with two roommates. We went to their house, spoke to the two roommates and convinced them to get tested. In this mission, we are also being supported by booth level workers (BLO) in the initiative. They are very helpful,” she adds.

Nearly a million Anganwadi workers, along with rural health workforce - the local ASHA (Accredited Social Health Activists) - have been roped in to assist the Indian government’s drive against @COVID-19.
Report for @SputnikInt pic.twitter.com/eAfSyDFk4b

​Lovingly called as ‘Didi’ (sister), Anganwadi workers have been deployed because of their major strength - close bonds and familiarity with people in their operating region. They are teachers to their underprivileged children in day care and health care advisors to pregnant women.

Keep distance, Wash your hands! Anganwadi worker educates the kids and their parents about the emerging COVID-19 risk in India. The video was recorded before the nationwide lockdown was implemented.

​Now largely involved in community surveillance, these women are also delivering food to the houses of children who earlier secured their meals in the Anganwadi day care.

“Kids see us and run up to us, chanting didi agai (sister is here). While they accept food, they also throw tantrums and demand they want a better meal and not regular rice!” Sharad Sharma, another Anganwadi worker, tells Sputnik.

Not Everything is Rosy

One of the Anganwadi workers who does not wish to be named reluctantly informs that they often feel like they need protection when they visit houses. She clarifies that she herself hasn’t faced any security issues, but the news reports of attacks on Anganwadi workers in other states disturb her.

These workers say that in terms of personal protection equipment (PPE), nothing has been provided by the administration and they are largely relying on home-made PPE. They also want the government to ensure the future security of their family if something happens to them; if they contract the virus.

“What if something happens to us tomorrow? There has been no assurance on the government’s part that our families will be taken care of. No monetary compensation for us has been rolled out,” says Sunita, who proudly states that she has even won the best worker award.

Talking about being in the hotspot and close to contacts of COVID-19 patients, Anganwadi workers do not hesitate to admit they are scared, even more for their family when they return home.

“It’s not that I am not scared. But once I return home from COVID-19 hotspot, even my kids run up to with sanitisers in their hands. My family supports me and they say it’s my duty and I should fulfil it,” Sunita elaborates.

These Anganwadi workers are even a greater force in rural areas. They have been assisting the government in screening hundreds of internal migrant workers who arrived in their hometowns after a daunting journey on foot following the government-announced lockdown.

While the Indian Prime Minister expressed the nation's collective gratitude for frontline health workers, there efforts have also been appreciated by opposition politicians, such as the former chief of India’s Congress Party Rahul Gandhi.