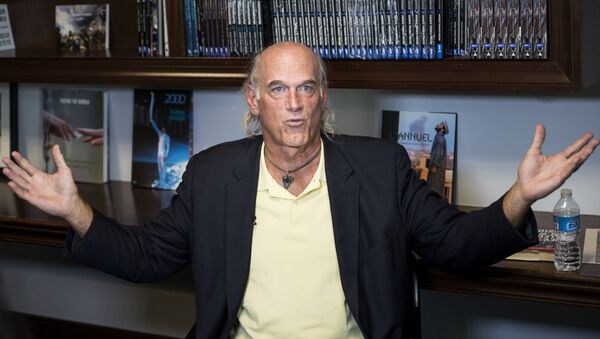 © AFP 2021 / Brendan SMIALOWSKI
Subscribe
RT host and former Minnesota Governor Jesse Ventura says he is considering the idea of entering into the 2020 US presidential election as a third party candidate - preferably as the nominee of the Green Party.

Ventura, who served as governor of Minnesota from 1999 to 2003, took to Twitter on Monday to hypothetically present the idea of him running for the office of US president. He noted that in this scenario, he would prefer to be the nominee of the Green Party, which he has endorsed.

OK, I've decided I'm going to test the waters. IF I were going to run for president, the GREEN party would be my first choice. I've endorsed the party and I'm testing the waters. #mondaythoughts #MondayMorning #MondayMotivaton #MondayMood

A followup tweet from the host of RT’s “The World According to Jesse” clarified that he has not taken steps toward filing for the race, other than authorizing a letter of interest that was issued to the Green Party.

To be clear: I haven't filed anything. I authorized a letter of interest that was sent on my behalf to the Greens and I'm testing the waters for Green Party nomination. I'm an independent. I'm not a Democrat or a Republican because I know they're not the solution.

The Green Party confirmed to Fox News on Monday that it had received the aforementioned letter from Ventura, but noted that the former governor has “not yet satisfied our criteria for classifying him as an active candidate.”

“Until he does so, we have no grounds for acknowledging him as an active candidate,” Green Party Communications Manager Michael O’Neil told the outlet.

Ventura, a US Navy veteran and retired professional wrestler who also held office as mayor of Brooklyn Park, Minnesota, from 1991 to 1995, told TMZ in November 2018 that he was considering an independent run to defeat US President Donald Trump in the 2020 election but had not yet made a decision, “because it’s a long time off.”

"If I do do it, Trump will not have a chance," Ventura told the tabloid news website. "For one, Trump knows wrestling. He participated in two WrestleManias. He knows he can never out-talk a wrestler, and he knows I'm the greatest talker wrestling's ever had."

He also mentioned a potential presidential campaign during a September 2019 interview with Fox 11 Los Angeles, explaining that he wrestles with the question of “if not me, then who?”

Ventura also brought attention to the US president’s absence from the Vietnam War over a medical deferment, which the Trump campaign has explained as being for “bone spurs on both of his feet.”

"This guy who claims to have had bone spurs got out of the Vietnam War because of it," the Vietnam veteran told Fox 11. "He couldn't even do one day of bootcamp to be a private."

He asserted to the outlet that the only way to reunite the US after Trump’s presidency would be to elect an independent candidate, rather than the Democratic or Republican nominee.

Indeed, Ventura mentioned a third-party run when he appeared as a guest on Radio Sputnik’s By Any Means Necessary in December 2019 as well, although noting he “doesn’t wanna do it,” which is why he would be good at it.

The 68-year-old’s entry to the 2020 presidential race would make him the youngest candidate when compared to Trump and former Vice President Joe Biden, aged 73 and 77, respectively.

000000
Popular comments
Must i wear pink underware if I support you Jesse? You must admit many of the Green supporters aren't mainstream Americans. I'm not much for color revolutions either and just assume maintaining my rights to carry firearms.

2007harleydavidsonsg
28 April 2020, 03:58 GMT3
000000
I have no problem with draft-dodgers from that horrific Vietnam War. What I do have a problem with are those same people who turn into warmongers and have no problem sending other people's kids to die in wars they start.