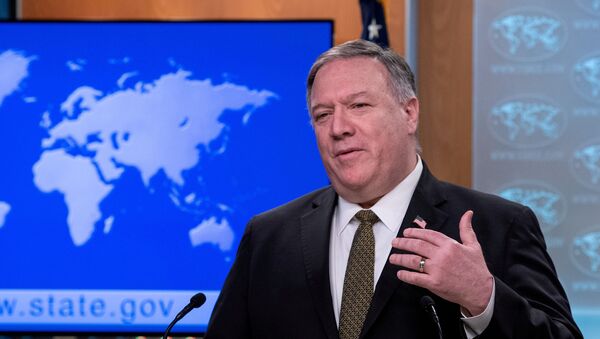 Pompeo also called upon the EU to sanction the entities and individuals who work on Iran's “missile programs”.

US Secretary of State Mike Pompeo has urged the UN to extend its conventional arms embargo against Iran which is set to expire in October, criticizing the country over its recent space launch.

Arguing that all launch vehicles use "incorporate technologies identical to, and interchangeable with, ballistic missiles, including longer-range systems such as intercontinental ballistic missiles", Pompeo insisted that "no country has ever pursued an ICBM capability except for the purpose of delivering nuclear weapons".

"For years, Iran has claimed its space program is purely peaceful and civilian. The Trump Administration has never believed this fiction. This week’s launch of a military satellite by Iran’s Islamic Revolutionary Guard Corps, a designated Foreign Terrorist Organization, makes clear what we have said all along: Iran’s space program is neither peaceful nor entirely civilian," Pompeo said.

He also called upon the European Union to "sanction those individuals and entities working on Iran’s missile programs."

"Iran neither has nukes nor missiles designed to be capable of carrying such horrific arms," he tweeted on 24 April.

On 22 April, Iran launched its Noor-1 (‘Light-1’ in Farsi) satellite, marking a significant breakthrough in the country's space program.

The Iranian authorities have provided very little information about the Noor-1’s capabilities, merely describing the craft as a "multi-purpose satellite with special uses in the defense sector."