The Great Space Escape: Scientists Learn How Light Can Flee From Black Hole 'Like a Boomerang' 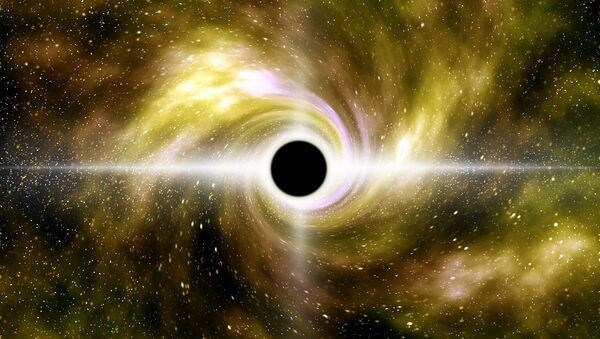 CC0 / /
Subscribe
The scientists' discovery may potentially help them to learn more about the nature of black holes, such as the rotation speed of these space objects.

Having examined archived X-ray observation data of a black hole whose mass is about ten times that of the Sun and which is located some 17,000 light years away from our planet, scientists have discovered a peculiar new way light can escape the immense gravitational pull of such celestial bodies, Live Science reports.

According to the media outlet, while light from a black hole's accretion disk can indeed escape into space, the study shows that the light from the black hole in question, XTE J1550-564, doesn't escape directly from the disk but rather gets reflected from the disk "like a boomerang" after being pulled toward the hole.

Study author Riley Connors, a postdoctoral researcher in physics at the California Institute of Technology's Cahill Center for Astronomy and Astrophysics in Pasadena, explained that the team studies light "coming from that corona and hitting the disk, bouncing off, and then arriving at our telescopes".

"The thing that we found, that was predicted in the 1970s, is that you could see light that comes from the disk bent all the way back onto itself," Connors said, referring to their team's recent discovery.

The researcher's findings may help gain further insight about other aspects of black holes', such as, for example, their rotation speed which scientists could possibly calculate by gauging how much this light "is bending and bouncing back", the media outlet notes.

"It's perhaps a more reliable way for us to measure how fast the black holes are spinning," Connors added, noting that while so far this phenomenon has been documented in the XTE J1550-564 system, other black holes out there may exhibit similar traits.

000000
Popular comments
What happens to matter inside a black hole? What if it simply ceases to exist? We would then have a massless gravitational singularity, a bubble in the fabric of space-time. If such a thing exists, it would spit out stars as fast as it ingests them.