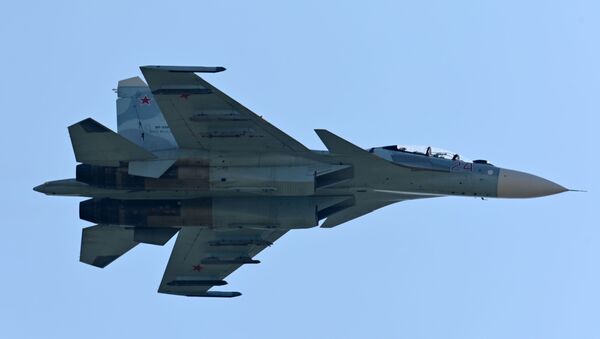 MOSCOW (Sputnik) - Two Russian Su-27 fighter jets intercepted and escorted a Belgian F-16 jet away from the Russian border over the Baltic Sea after the aircraft was spotted during scheduled flights in the area, Russia’s Defense Ministry said Saturday.

The Western Military District added that the two Sukhoi Su-27 jets, which took flight to engage and escort the aircraft before it crossed the state border, identified the F-16 fighter jet as belonging to the Belgian Air Force by the numerical identifiers on the aircraft exterior.

"The flights of the Russian aircraft were carried out in strict accordance with international law on the rules of airspace use," the statement added.

The footage of the Su-27 jets escorting the F-16 has been published by Ria Novosti news agency.

Encounters between Russian and NATO airсraft have intensified recently, with up to 20 jets belonging to the bloc approaching the country's borders every week.  Russian air defence forces regularly monitor, target, and track hundreds of NATO aircraft operating close to the border, and occasionally scramble fighter jets to escort foreign military aircraft away from Russian airspace.