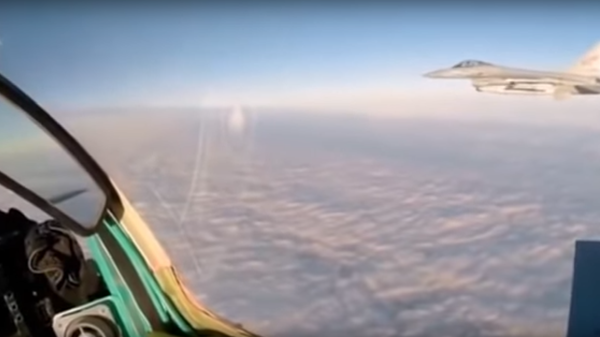 Ilya Tsukanov
All materialsWrite to the author
Aerial encounters involving Russian and NATO warplanes saw a significant uptick in the wake of the 2014 Ukrainian crisis, as the Western alliance concentrated more and more forces near Russia’s western borders and ramped up reconnaissance and bombing run practice off the country’s Baltic and Black Sea coasts.

A YouTube user describing himself as a former Russian Air Force fighter pilot has uploaded a video showing a Russian MiG-31 fighter jet accompanying a Tu-95MS strategic bomber facing off with a NATO F-16.

The video, filmed from inside the MiG’s cockpit, shows the pilot approaching the NATO jet, waving and gesturing the thumbs up sign, carefully wedging his plane between the F-16 and the Tu-95MS he’s escorting. The NATO plane is then seen starting to veer to the right, away from the pair of Russian planes.

The user gives no indication about when or where the incident took place.

Aerial encounters between Russian and NATO jets have become a regular occurrence in recent years, with the military publishing statistics on its observation of between one and two dozen Western alliance jets near Russia’s borders on a weekly basis. In 2018, Russia’s air defence forces reported the tracking of nearly 3,000 foreign military aircraft near its borders. The air force scrambles jets to intercept the foreign bombers, reconnaissance aircraft and drones if they get too close.

Developed during the Cold War, the MiG-31 is a fourth-gen all-weather supersonic interceptor, capable of accelerating to speeds up to 2,500 km per hour. The F-16, a fourth-gen US multirole fighter, can be armed with an array of air-to-air and air-to-ground munitions, and has a top speed of 2,120 km per hour, and serves as the backbone of many NATO armies. 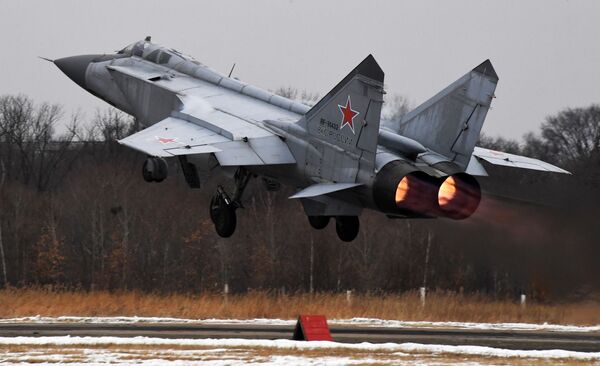