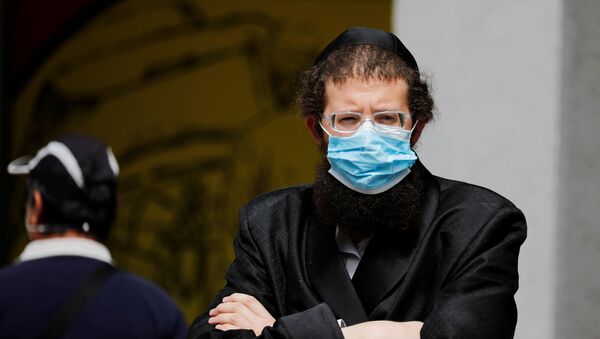 © REUTERS / Amir Cohen
Subscribe
MOSCOW (Sputnik) - Israeli President Reuven Rivlin has invited the leaders of a protest of self-employed workers taking place outside of the country’s parliament on Sunday over economic restrictions imposed amid the COVID-19 outbreak.

According to the i24news portal, hundreds of protesters gathered in Jerusalem, calling for the lifting of stringent social distancing measures designed to curb the spread of the outbreak, which have caused economic disruption. Individuals working in the entertainment, culture and agricultural industry participated in the protest, according to the portal.

Later in the day, Rivlin stated that he had acknowledged the protest and had invited the leaders to take part in talks to discuss how the government can assist self-employed workers during the epidemiological and economic crisis.

"I heard the protest of the self-employed outside Beit HaNasi and invited its leaders to come and talk. This is an emergency and I promised them, and all self-employed people, that policy-makers will hear what they say. We need to see the big picture without abandoning anyone," Rivlin wrote on Twitter.

As of Sunday morning, the Israeli Ministry of Health has reported more than 13,362 cases of COVID-19 since the start of the outbreak, resulting in the deaths of 171 people.

000000
Popular comments
For starters, there is a very simple solution. End the idiotic lockdown and let the country get back to work and play. Then, throw the indicted Nuttin-yoyo into the slammer while he awaits trial on his rampant corruption.