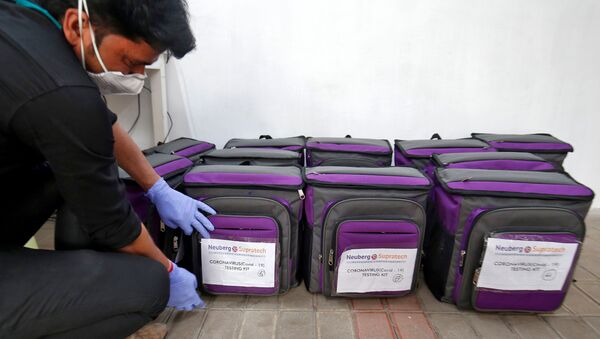 © REUTERS / AMIT DAVE
Subscribe
New Delhi (Sputnik): India has ordered 15 million personal protective equipment (PPE) kits, and 1.5 million rapid testing kits from China. However, the delivery of these kits was delayed for a week due to the shortage of cargo flights.

The much-awaited first batch of Chinese kits arrived in India on Thursday and is expected to expedite the testing of COVID-19 in a country with 1.3 billion inhabitants.

Government sources in New Delhi said that a flight with rapid antibody testing kits (the first lot of 300,000 from Guangzhou Wondfo and 250,000 from Zhuhai Livzon) and RNA extraction kits (100,000 from MGI Shenzhen), left on Thursday morning after Chinese customs cleared them late on Wednesday.

The Indian Embassy in Beijing and Consulate in Guangzhou played a key role in supplying these kits, the sources said.

Another official from the Indian Council of Medical Research (ICMR) informed that the kits have already reached India.

“The customs clearance process is underway, once done, kits will be taken to NIMR (National Institute of Malaria Research) and then will be distributed to states for screening in hot spot areas", the official added. The country identified a total 170 districts (25 percent of total districts) as red zones of the infection on Wednesday.

China has tightened regulations on exporting such equipment following criticism from several European countries over the quality of exports.

Earlier this week, India’s Ambassador to China Vikram Misri had said that the Indian government was in the process of, or had already completed, contracts for 15 million personal protective equipment kits, consisting of gowns, masks, gloves, goggles, etc.

“We have a schedule that stretches from deliveries starting 15 April until the end of the month, when half a dozen consignments ordered by different entities in India will be delivered", Misri said while addressing an online conference on Tuesday.

The Chinese delivery was scheduled to arrive on 8 April but due to shortages of cargo flights it was delayed for a week. The delay in deliveries of these kits has, in turn, delayed testing.

000000
Popular comments
Tk, Gringo deserve that. I already send test kits full of virus to UK. Another 700+ will die today because of me.