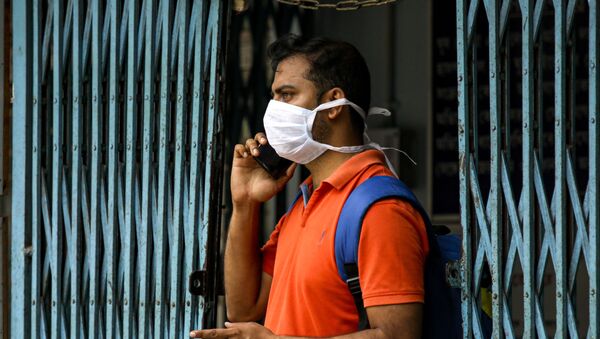 Pratibha Sharma
Sputnik correspondent
All materialsWrite to the author
New Delhi (Sputnik): Necessity is the mother of invention – India’s start-up community seems to be living according to this axiom. The coronavirus pandemic has brought together the most innovative minds of India’s start-up ecosystem, which is rising to challenge of containing the spread of the infection in India.

Whether its launching a chatbot to resolve all your queries regarding COVID-19 or designing an app to keep track of quarantined people, start-ups in India are joining forces to cooperate with the government in the arduous task of containing the spread of coronavirus.

Delhi-based technology and digital services-driven start-up Tagbin has launched a ‘CoCare’ app that would primarily allow both the government and the citizens to trace people who have come in contact with COVID19 patients; those who have been  quarantined. It would also help determine infection-prone areas.

The app uses a track and trace algorithm using Bluetooth and GPS and has a data encryption policy in place to protect the identity of the contacts. Moreover, it provides services like E-passes, which are required for travel during the lockdown when urgent needs arise.

Saurav Bhaik, Founder & CEO of Tagbin told Sputnik: “The app is currently in its final testing phase and has been accepted by the state government of Himachal Pradesh, which has agreed to implement it as soon as possible. It will be operated under the Department of IT, Himachal Pradesh.”

A parallel can be drawn to similar services provided by a software application named ‘Coronamap’ in South Korea. The country has emerged as an outlier in terms of its efficiency in tackling the spread of the virus.

Another start-up named Haptik – a conversational Artificial Intelligence (AI) platform and a subsidiary of Reliance Industries Limited (RIL) - has launched an artificial intelligence-powered chatbot: MyGov Corona Helpdesk. It is the official Government of India chatbot for resolving queries regarding the coronavirus.

On being asked about the vision of the app, Aakrit Vaish, Co-Founder and CFO, Haptik, told Sputnik: The ‘MyGov Corona Helpdesk’ has been engineered to fight rumours, educate the masses and bring a sense of calm to the current chaos-like situation. We hope that this chatbot can help the Government of India spread the right information across the nation.”

Meanwhile, the start-up community in India has also launched Action COVID-19 Team (ACT). The team, which includes the founder of leading Indian start-Ups and is supported by industry veterans, will collaborate with government agencies in scaling up solutions to the COVID-19 crisis in order to deliver promising results.

It aims to provide resources and financial grants to start-ups seeking to create a large-scale impact in the fight against COVID-19.

While some are using their skills to develop solutions, other are coming forward to offer whatever they have, often at a significant discount.

Healthcare Professional Marketing Start-Up Doceree has offered uninterrupted and free use of its platforms to pharma companies to advertise in India and the US until 30 April.

Dr. Harshit Jain, Founder & CEO of Doceree, told Sputnik: “Pharma companies are unable to reach out to the doctors for face time to provide them with the free flow of scientific information about the drug and company. Therefore, the step was taken to support them while their crucial workforce of medical and sales representatives are locked indoors.”

Similarly, Nutraceutical Venture Bhookha Haath is looking forward to play a pivotal role in building community-immunity by supplying its immunity boosters, made from fruits, nuts, and herbs, free of cost to underprivileged members of society in smaller packets manufactured especially for free distribution. The start-up is seeking a government permit to go through with the project.

Abhimanyu Rishi, Director of Bhookha Haathi, says “Bhookha Haathi plans to give away its products, especially the immunity and energy boosters, to the under-served population along with the help of good Samaritans and NGOs to help the people reeling under the lockdown meet their nutritional needs.”

Start-Ups have emerged as one of India’s greatest strengths.The country has witnessed remarkable growth in this sector over the last five years and was ranked 3rd globally, with more than 4,200 start-ups.

Consumerism and the digital revolution triggered by the wide outreach of smartphones and internet access (India has over 493 million internet users) are the main factors driving the growth of start-ups.

The push has also come from Narendra Modi's government, which launched a flagship programme ‘Startup India’ - which seeks to catalyse start-up culture in the country and “build a strong and inclusive ecosystem for innovation and entrepreneurship in India”.

Meanwhile, India currently has 1,649 confirmed cases of coronavirus and has reported 41 deaths so far. The country is currently under a 21-day lockdown that came into effect on 25 March after the announcement was made by Prime Minister Modi a day earlier.