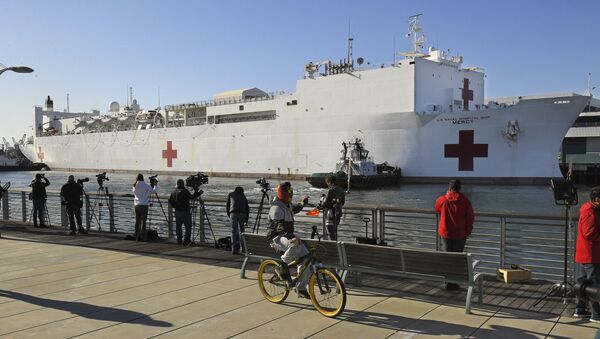 The US Attorney's Office for the Central District of California announced Wednesday that a train engineer was arrested by federal agents that morning after he allegedly ran a locomotive off the tracks at full speed in an apparent attempt to strike the USNS Mercy.

The Department of Justice release revealed that train engineer Eduardo Moreno, a 44-year-old resident of San Pedro, California, was arrested on one federal count of train wrecking on April 1. He was previously being held by Los Angeles Port Police on "local charges" the night of the incident - March 31 - and then turned over to the Federal Bureau of Investigation (FBI).

Video viewed by the port police showed the train traveling at a "high rate of speed before crashing through various barriers and coming into close proximity to three occupied vehicles." Moreno was then initially taken into custody by a California Highway Patrol (CHP) officer who witnessed the scene.

The DoJ release noted that Moreno confessed to the crime in his first interview with LA Port Police and said he "did it" to bring media attention to the USNS Mercy - which was docked in the city's port to assist local hospitals with patients who do not have COVID-19 novel coronavirus-related ailments.

He contended that the medical ship was not there for the purpose of assisting with the COVID-19 pandemic and was instead part of an undercover government takeover plot.

Chopper footage from the scene at the Port of Los Angeles, California, shows the proximity of Eduardo Moreno's train wreckage (bottom-left corner) to the USNDS Mercy (top-right).
© Twitter/@MikeRogersTV

He maintained this story in his interview with the FBI and said that he wanted to "wake people up," according to the affidavit.

“Moreno stated that he thought that the USNS Mercy was suspicious and did not believe ‘the ship is what they say it’s for,'" the filing stated.

The federal charge of train wrecking carries a statutory maximum penalty of up to 20 years in federal prison, according to the DoJ release.