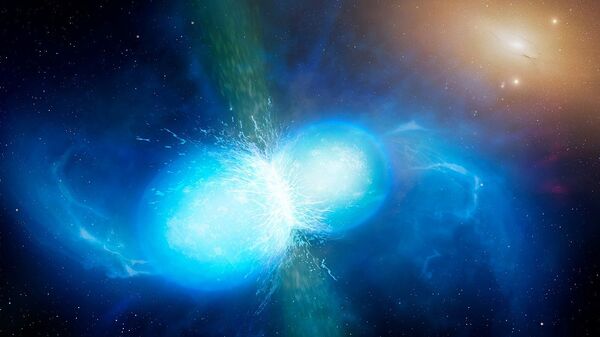 Neutron stars are exotic astronomical objects that are just bare stellar cores with no outer layers and thermonuclear reactions going on. When two neutron stars merge, they disturb space and time, sending gravitational waves throughout the universe.

For the second time in history, scientists have detected what might be a collision of two neutron stars. The observatory network, which includes LIGO (the Laser Interferometer Gravitational-wave Observatory) in the US as well as the European Virgo detector, caught gravitational waves – ripples of the very fabric of space-time – back on 25 April 2019. The study appeared in Astrophysical Journal Letters.

The first such observation, named GW170817, was witnessed in 2017 and it made history because both gravitational waves and light were observed from the same cosmic event. However, the 2019 merger didn’t result in any light being detected.

"Unlike the first detection of a binary neutron star, GW170817, no associated light was observed despite extensive follow-up efforts. This was not surprising as this event (i.e. 25 April 2019 called GW190425) was at much greater distance and not well localized in the sky, both factors making it highly challenging for space and ground based telescopes", said Dr Eric Howell from the University of Western Australia, an ARC DECRA post-doctoral fellow who participated in the study.

One of the most interesting details about the recently merged binary system is that its total mass significantly exceeds that of any other known neutron binary systems. Meanwhile, neutron star collisions are known to happen between objects with a combined mass of less than 2.9 solar masses, although this time the total mass was about 3.4 solar masses. To understand the reason behind such an unusually large mass, the scientists came up with an explanation.
The collision might not have taken place between two neutron stars, but a neutron star and a black hole, which is heavier. However, in this case the black hole would have to be very small for its class. So rather than this, the researchers believe the merger happened between two neutron stars and their collision resulted in a black hole.

"This event is a perfect example of how gravitational-wave astronomy is a completely new and unique way of looking at the Universe. Binaries with similar masses to this event may not exist in the Milky Way or may be completely invisible to conventional radio telescopes", commented Simon Stevenson, an OzGrav postdoctoral researcher.