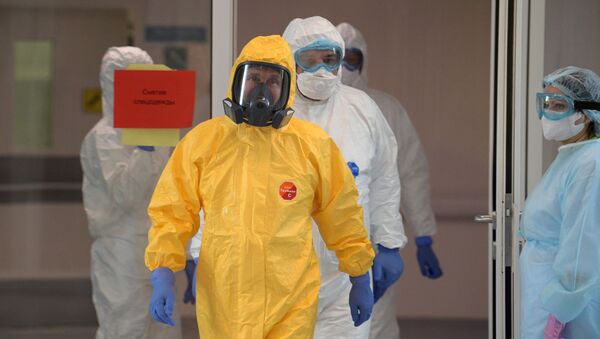 The number of COVID-19 cases in the world has surpassed 350,000 with more than 17,000 fatalities. Russia has registered 495 cases of the new coronavirus infection, including 57 new cases in 14 regions over the past 24 hours. Patients infected with coronavirus in Russia are sent to a medical facility in southwest Moscow.

Russian President Vladimir Putin has arrived at a hospital in Kommunarka, a neighbourhood in SW Moscow, where patients are being treated for coronavirus. A video emerged online where the Russian president is seen donning a yellow hazmat suit and a respirator, surrounded by hospital staff.

Kremlin spokesman Dmitry Peskov had previously said that Deputy Prime Minister Tatyana Golikova, Moscow mayor Sergei Sobyanin and health minister Mikhail Murashko had held a meeting with President Putin, where he informed them that he would go to Kommunarka to check the state of affairs at the medical facility.

The Russian president earlier stated that he was planning to discuss special medical measures to contain the coronavirus spread with the cabinet.

The hospital is situated in southwest Moscow and is currently treating COVID-19 patients and those who are suspected of having contracted the disease.