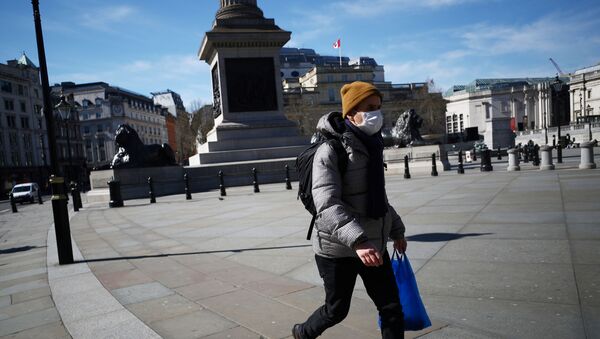 © REUTERS / HANNAH MCKAY
Subscribe
Mohamed Elmaazi
All materialsWrite to the author
The British government has announced cash grants, the abolition of business rates, deferred taxes, and a reimbursement of 80% of furloughed workers’ wage costs to assist businesses cope with the economic consequences of COVID-19. But critics say the measures have yet to include enough support for the UK's many self-employed and precarious workers.

The Independent Workers Union of Great Britain (IWGB) has announced that it will be taking legal action against the UK government over its COVID-19 economic support measures which - they argue - "discriminate" against, and fail to provide proper support for, self-employed workers, women, minority groups, and those in the "gig economy".​

Boris Johnson's government announced that it will provide £25,000 cash grants for small businesses, pay employees' wages up to 80% (up to £2,500 a month), "so someone can be furloughed rather than laid off", defer tax collections, and abolish business rates for the hospitality, retail, and leisure sectors for one year. They also say that those designated as "key workers" will be permitted to travel on public transport for free.

But most of the COVID-19-related economic measures, including the wage subsidies, don't assist self-employed or precarious workers.

"Many low paid and precarious workers are on the front lines of this crisis distributing food, delivering medical samples, cleaning buildings and looking after children in need, yet they have the least protection. Many who become sick or need to self-isolate will receive little or no sick pay. Others who are laid off will not receive wage subsidies from the Government because they are not employees", says IWGB General Secretary Dr Jason Moyer-Lee.

The IWGB says that the current policies are therefore "not only discriminatory" and "risk driving millions of workers into deeper poverty", but also pose a serious threat to public health. This is because many self-employed workers, "are forced to continue working while sick or while they should be self-isolating in order to survive".

​According to the Office for National Statistics (ONS), the percentage of the UK labour force who are self-employed has increased substantially since 2001, and ranges from 10.6% in the northeast of Great Britain to 17.4% in London. 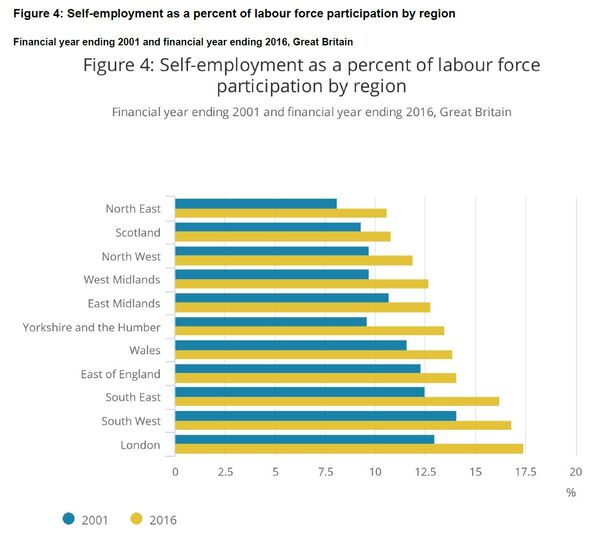 Self-employed as a percentage of labour force participation by region ONS Trends in Self-Employment in the UK, 2018
© Office for National Statistics

Meanwhile, weekly self-employment earnings in 2016 were the highest in London at £352 and lowest in the North West at £200. 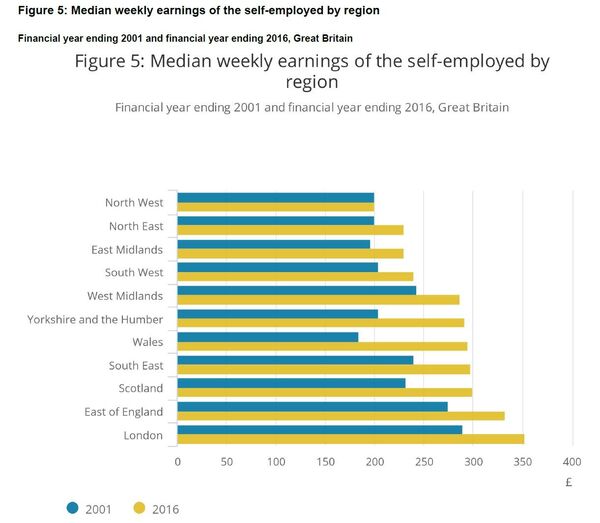 Median weekly earnings of the self-employed by region ONS Trends in Self-Employment in the UK, 2018
© Office for National Statistics

The number of self-employed women has increased by 51.3% over the last 10 years, which is more than double the increase for men.

Labour's Shadow Chancellor John McDonnell argued that self-employed people should be included in the government's compensation scheme, whilst noting that former Governor of the Bank of England Mervyn King also endorsed idea.

​Labour Leader Jeremy Corbyn has also called on the government to do more to protect renters, workers, and the self-employed, including to increase Britain's statutory sick pay.

​"The government's measures would leave five million self-employed and gig economy workers with just £94.25 a week sick pay", Corbyn wrote in a tweet on 23 March 2020. "This is simply not enough. Those without a fixed wage must not be left to suffer", he added.

The IWGB launched a crowdfunder to raise £8,000 to protect itself should they lose their suit against the government and the court awards costs be against them.