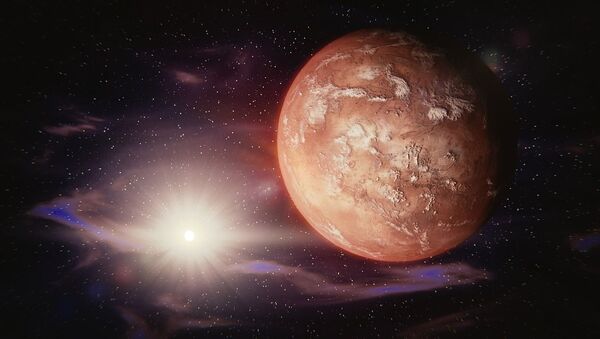 CC0 / /
Subscribe
The possibility of life on Mars has dominated the research of scientists searching for a planet aside from Earth that is capable of providing habitats in which alien species can emerge and survive.

The conditions on Mars could have been hospitable for the formation of RNA (ribonucleic acid) molecules, MIT researchers claim in a paper uploaded to pre-print server bioRxiv in February.

The team of researchers led by planetary scientist Angel Mojarro of MIT modelled the geochemical conditions of the planet four billion years ago, based on the knowledge of Mars' geochemistry today.

"In this study we synthesise in situ and orbital observations of Mars and modelling of its early atmosphere into solutions containing a range of pHs and concentrations of prebiotically relevant metals, spanning various candidate aqueous environments," the researchers wrote.

"We then experimentally determine RNA degradation kinetics due to metal-catalysed hydrolysis and evaluate whether early Mars could have been permissive towards the accumulation of long-lived RNA polymers."

If they are correct, life may have formed on Mars consistent with the RNA World hypothesis, which assumes that part of the evolutionary process is that RNA predates the DNA (deoxyribonucleic acid) in which our genetic information is largely found.

RNA is self-replicating and capable of catalysing cellular chemical reactions as well as storing genetic information. It is more fragile than DNA however and was eventually supplanted by the latter.

For RNA to form in the first place, however, certain geochemical conditions are required.

The research is yet to be peer-reviewed, but could bring us closer towards discovering life on the Red Planet.

Our means of discovering life on Mars is limited because of the sheer distance which restricts the extent to which technology can be used to explore and understand Mars.

The planet's geochemical history, however, can be used to determine if Mars at one point was at least hospitable to life, and if we are looking for it in the right places.

000000
Popular comments
Were trying to find intelligent life on Mars, while we should be looking to find some on earth.