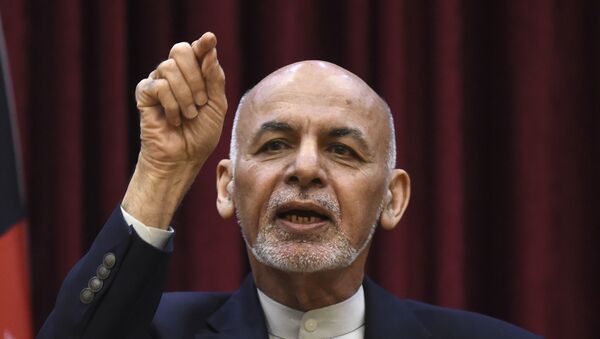 MOSCOW (Sputnik) - Afghan President Ashraf Ghani will be sworn in for a second term on Monday, more than five months after claiming victory in an election that is being contested by his challenger.

Ashraf Ghani has been sworn in as the Afghan president at a ceremony at the presidential palace in Kabul, according to a local TV network broadcasting the ceremony. Ghani's deputies Amrullah Saleh and Mohammad Sarwar Danish were sworn in as vice presidents.

Afghan President Ashraf Ghani said during his inauguration ceremony on Monday that he will do everything possible for the development of Afghanistan and will engage in work with the cabinet in two weeks.

"I promise that I will do my best to help the development and development of Afghanistan. I will start working with the cabinet two weeks later and will also include the government structure," Ghani said in his inauguration speech.

In the meantime, Ghani's rival Abdullah Abdullah is holding a parallel inauguration ceremony, and refuses to recognise Ghani's presidency.

Earlier, the Afghan election commission declared Ghani the winner of the September vote last month but the inauguration was postponed to allow for talks with his outgoing chief executive, Abdullah Abdullah.

Abdullah, whose office was created under a power-sharing deal after the previous disputed election, threatened to have a parallel inauguration on the same day and create his own government.

The United States reportedly asked Ghani to delay taking the oath of office to negotiate with his old-time rival but nothing came of them. Both politicians have sent out invitations to competing ceremonies.