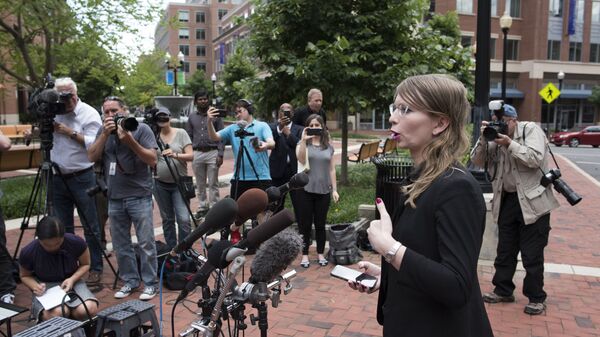 A recent court filing has revealed that whistleblower Chelsea Manning will appear in court twice next week, including before the grand jury of which she is held in contempt. One journalist told Sputnik it could be an attempt to further wear her down by forcing her to endure the ordeal of going between jail and court.

Manning’s lawyer, Moira Meltzer-Cohen filed a motion on March 3 to try and stop her client from appearing before a Virginia grand jury on March 10, noting it “serves no legal or rational purpose” given Manning’s demonstrated “incoercibility.”

“I have been advised by Assistant United States Attorney Godron Kromberg that the government intends to have Ms. Manning transported to appear again before the Grand Jury on March 10, prior to our scheduled hearing,” Meltzer-Cohen wrote.

Shadowproof journalist and Unauthorized Disclosure podcast co-host Kevin Gosztola told Radio Sputnik’s Loud and Clear Friday this could be an attempt to wear the former US Army intelligence analyst down by forcing her to go through the humiliating, exhausting process of appearing in court.

“Why would you do this when you already know that Chelsea Manning is not going to testify? Crucially we have, in the same week - so next week’s going to be a pretty big week for Chelsea Manning, potentially, in her case, because this is happening, where she is going to be hauled before the grand jury on March 10, and then on March 13. That’s when she’s scheduled to have an open hearing on a recent motion that was submitted multiple weeks ago, like two or three weeks ago, to the judge that has been overseeing her complaints about how she is being pursued with this subpoena. Again, they re-upped their challenge to this, saying she should be set free,” he said.

“Why do I think this is happening? If I had to guess, it just seems to point back to what I reported on when I was in London at the US extradition proceedings” for WikiLeaks co-founder Julian Assange, Gosztola told hosts Brian Becker and John Kiriakou.

“The fact is that the UK prosecutor was extremely frustrated, it seemed, that Chelsea Manning’s statement about the timeline of events in the case was being relied upon by defense attorneys and that they have really no way to rebut it, which they need to be able to do in order to prove their case that Julian Assange was using Chelsea Manning as some kind of insider or spy that had been recruited in order to advance the WikiLeaks agenda against the United States.”

“The prosecutor said during these proceedings [to the judge], ‘You can’t rely on a self-serving statement without any qualification whatsoever. It’s the self-serving statement of a co-conspirator,’ and said that the statement that the defense was relying on was indicative of someone who has consistently tried to help out Julian Assange,” the journalist told Sputnik.

“The problem here is that what Chelsea Manning is dealing with is something that she’s had to deal with for the last decade, which is that the government refuses to give her any agency whatsoever,” Gosztola said. “That’s an important thing to emphasize here, because they don’t believe that she could be independently doing any of this - as I said, ‘consistently trying to help out Assange.’ Even today, they still believe that she might be working for Assange or … want any judge that has any authority to believe that this is something that she’s being manipulated into doing in order to serve WikiLeaks - [that] she wouldn’t do this on her own principles.”

The journalist noted the way that, as early as 2010, Manning was being lambasted for “having gender identity issues, or ‘You’re struggling with your sexual orientation, you have mental health problems, you had a broken home when you grew up, you’re dealing with all of this, so that’s why within the military you made disclosures to WikiLeaks. It couldn’t possibly be because you saw war crimes and thought that they needed to be exposed.’”

“I can’t help but think of what I witnessed with Julian Assange in the UK a little more than a week ago, where they were complaining about what happens to someone who, they’re made to get up every morning, they’re brought into proceedings, they’ve got to go through strip searches, they might be handcuffed or shackled. In her case, she’s going to have to actually be brought from the detention facility over to the court, so that involves transportation. That can put a lot of strain on somebody, so I was thinking, maybe what they’re doing is, they’re going to try to wear her down even further by summoning her to these grand jury proceedings on a more regular basis and force her to plead the Fifth [Amendment], or sit there and go through this. It’s going to be an additional effort to break down her spirit, because what they’ve done so far has been ineffective,” he said.

“But then the second thing is: why this power trip? It could be an act of desperation,” Gosztola noted. “Maybe it’s not an act of strength but an act of weakness, because what they really have to do is, by some sheer dumb luck, get her to sit before them and start talking about what she said in her very clearly articulated statement. Because what they want more than anything is for her to sit before them and have to try and recall what happened … about 10 to 11 years ago now.”

“That’s a long time, and in many ways, this passage of time should be working in the defense’s favor for both Julian Assange and Chelsea Manning. It should be this thing where we all are forced to move on, because you just can’t expect anyone to remember what happened, and then also because Chelsea Manning already was prosecuted, served time in prison and then had her sentence commuted and should be able to move on.”

Gosztola noted the incredible lack of oversight that exists over the grand jury system, leaving those brought before such panels with few options for recourse about what happens to them - points Manning has explained in detail as part of her personal objection to the grand jury system, which she has called a “kangaroo jury.”

“We have zero evidence from this grand jury, to date, that they are putting together cases for any other individual outside of Julian Assange. It’s a massive abuse of process for this grand jury to be dragging Chelsea Manning into their room, wherever they’re doing these proceedings, and asking her these questions. Because at this point, and I’ve said this before, she is a prosecution witness. They have already indicted Julian Assange, and if they’re not going to indict Sarah Harrison, who worked with Julian Assange, or some other person who worked on disclosures with WikiLeaks, they’re not going to issue new indictments, she needs to be set free, and they can call her if Julian is ever put on trial.”