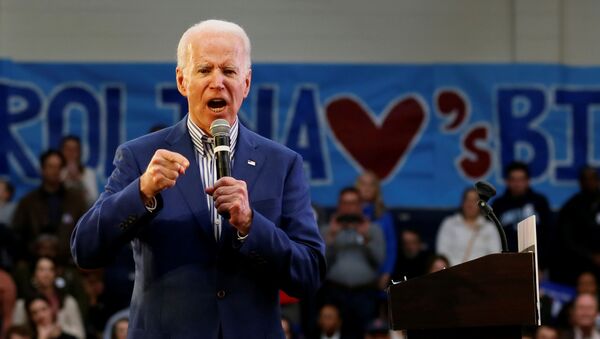 Heading into Super Tuesday, Sanders had a 6-delegate lead over Biden after coming out on top in Iowa, New Hampshire, and Nevada, while Biden performed strongly in South Carolina. However, Biden now leads Sanders by a delegate count of 566 to 501. A candidate needs to secure 1,991 delegates to win the party nomination ahead of the July convention.

The previously fragmented field of moderates running against Sanders was transformed when Minnesota Senator Amy Klobuchar and South Bend, Indiana Mayor Pete Buttigieg dropped out and publicly endorsed Biden on the eve of Super Tuesday. On Wednesday, former New York City Mayor Michael Bloomberg also pulled out and endorsed Biden, which means the former vice president may pick up even more moderate votes throughout the rest of the campaign.

"The exiting of the campaign of other moderates Senator Klobuchar and Mayor Buttigieg further consolidated moderate votes to provide a surge of support for the former vice president", Rasmussen said.

The moderates also appeared to gain due to the distortion and demonisation of socialism prevalent in the media and conventional wisdom. Political analyst and historian Dan Lazare said that the fearsome backlash against Sanders as a left-wing radical was in fact based on a total misconception.

"The funny thing is that Sanders is not even very far to the left by international standards. Britons joke that [United Kingdom Prime Minister] Boris Johnson is more radical since he has promised to step up funding for the National Health Service (NHS)", Lazare said.

The NHS in structural terms is more socialist than the universal insurance scheme that Sanders has in mind for Medicare for All in the United States, Lazare added. "Any sort of national health care system, however conservative, is more than America's broken-down political system can handle", she said.

The Super Tuesday primary results had dealt a mortal blow to hopes for a significant progressive reform wave in the United States, Lazare stated.

"The Democratic renewal promised by Sanders was never more than a pipe dream, but now even that has gone up in smoke," he said.

University of Houston Professor of African-American History Gerald Horne agreed, saying that the panic in the US elite over socialism spurred Biden's surge.

Even if Sanders somehow manages to edge ahead of Biden in primary and caucus victories and the number of delegates pledged to him before the Democratic convention opens in Milwaukee in July, the powerful super-delegates in the party are already arraigned against him.

The New York Times reported on 27 February that an overwhelming majority of the 93 super-delegates they interviewed told the newspaper's reporters they were determined to oppose Sanders for the presidential nomination.

"Bernie will likely be smeared by the media, data will be leaked from unknown sources, and some may bring into question his character and health; and of course, he will become a Russian Agent or Putin Stooge. Meanwhile, care will be taken to protect Sleepy Joe", Rasmussen said.

Lazare agreed that the Democratic National Committee and the old party establishment were determined to block Sanders at all costs.

"The bottom line is that the Democratic establishment deep-sixed a fighter who could mobilise voters against Trump in favour of a corrupt, brain-dead cretin… But that's why Democratic bosses want [Trump] instead of a Bernie candidacy", he said.

"The Orange One [Trump] will eat him [Biden] for breakfast, lunch, and dinner," Lazare said.

Horne too observed that the Trump base "was not crumbling" and that the president leads a better-organised campaign than Biden.

Rasmussen also said the Democrats, focused on Ukraine-gate and the Russia probe, have failed to recognise that Biden would likely lose to Trump.

Paul Poast, Associate Professor in the Department of Political Science at the University of Chicago, thinks that what is most surprising isn't that Biden did well in the Southern states, but the strength of his performance and that all of the moderate candidates quickly decided to drop out for the purpose of supporting Biden.

"Of course, Biden still has a lot of history that can be used against him. We're already seeing Sanders doing just that. Trump would likely do the same in a general election", Poast noted.

On Super Tuesday, Biden won 10 out of 14 states - Alabama, Arkansas, Massachusetts, Minnesota, North Carolina, Oklahoma, Tennessee, Texas, Virginia, and Maine - far more than he was expected to. He also showed a nationwide popularity and strength that far exceeded Senator Bernie Sanders. February polls showed Sanders was ahead of Biden in some Super Tuesday states, but Biden made real gains in the latest polling just before the Super Tuesday voting.

Sanders only won four states on Super Tuesday - California, Colorado, Utah, and his own Vermont.