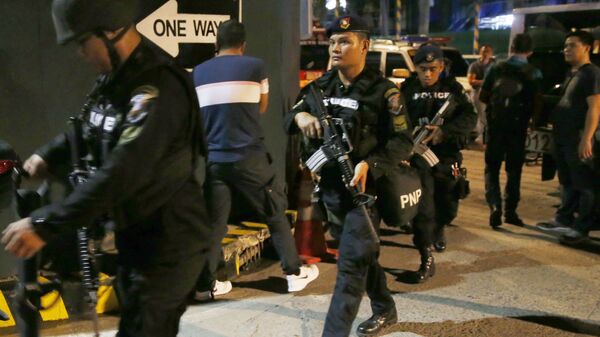 Live Updates: All Hostages From Mall in Philippines Freed After Hours-Long Standoff

Subscribe
International
India
Africa
A shopping mall in an upscale district of Manila was surrounded by Philippine police after gunshots were reported, according to police.

According to media reports, a former security guard has taken several employees of the V-Mall in the city of San Juan hostage.

San Juan Mayor Francis Zamora said that one person had been shot and was being treated at a local hospital, according to ABS-CBN News.

The police had evacuated the V-Mall after receiving reports of gunshots in the area.

The man, who took hostages in a shopping center in the Philippine capital Manila, was arrested by the police, according to the Rappler.

All hostages at a shopping mall in the Metro Manila area of the Philippines were freed, the CNN Philippines reported Thursday.

The gunman reportedly asked for contact with media and former co-workers. The management of the security team where he used to work apologized and offered to resign.

Philippine hostage-taker releases one person, according to CNN Philippines.

The former guard, who has taken about 30 people hostage, tried but failed to convince fellow guards to join him, according to San Juan Mayor Francis Zamora.

"We'll do our best to settle this issue peacefully," Zamora told reporters.

LOOK: Security officials of a Greenhills mall and Sascor Armor Security Agency say sorry to hostage-taker Archie Paray and vow that they will resign from their posts as resolution to the issue. | @DYGalvezINQ pic.twitter.com/3Lj0QScM6D

“A fellow security guard was injured, but has already been brought to the hospital. Our priority right now is to ensure the safety of the employees, and of the public,” Greenhills Center Management statement read.

About 30 people are being held hostage at the administration office of Vira Mall, San Juan Mayor Francis Zamora said, quoting the police.

"The initial information that we have... is he has firearms and grenades with him," Francis Zamora said.

LOOK: Policemen and several spectators were seen huddled at the V-Mall entrance amid reports of commotion at the Greenhills shopping center. (Photo courtesy of John Conrad Carlos) pic.twitter.com/YpGZHS4K0D