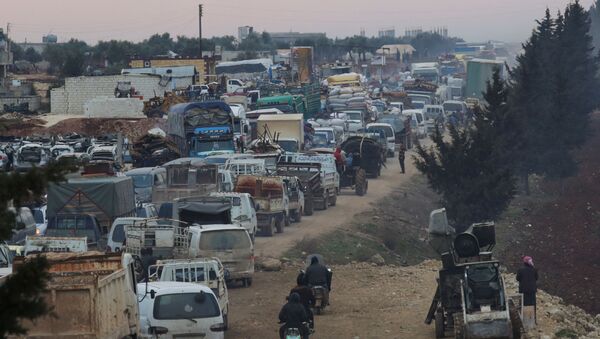 The London based monitor claimed on Monday that air strikes by the Russian Air Force resulted in the deaths of five civilians.

The Russian Defence Ministry on Monday announced that its planes did not carry out airstrikes against the villages of Al-Bara and Kansafra in Syria’s Idlib province last Saturday, pointing out that no Russian aircraft was operating in the area at the time.

At a press briefing, Rear Admiral Oleg Zhuravlev, head of the Russian Center for the Reconciliation, refuted reports by the London-based Syrian Observatory for Human Rights, saying they were not true.

"The information released by the British NGO is a fake," Oleg Zhuravlev noted.

This comes amid reports of Syrian military advances in Idlib. On Monday, the Syrian state-run SANA news agency reported that the country’s armed forces had cleared five villages in the northwestern Idlib of militants.

Zhuravlev added that Russia and Turkey have conducted a joint patrol of the Aleppo, Raqqa and Hasek provinces, and have noted that no incidents were registered.
He added that armed militants continue to violate the ceasefire agreement in the Idlib de-escalation zone, stressing that 26 shellings were recorded on Monday.

Erdogan Confirms Intention to Meet With Putin, Merkel, Macron to Discuss Idlib on 5 March
Tensions in Idlib have been running high since early February, as Syrian armed forces shelled a Turkish observation post, killing six troops and one civilian contractor. Ankara responded with retaliatory strikes, with Turkish President Recep Tayyip Erdogan claiming on Friday that the attacks resulted in the death of 150 Syrian troops.

Moscow has criticized Ankara’s actions in Idlib, saying Turkey has failed to live up to its Syria commitments, including a lack of actions on distinguishing between terrorists and several opposition forces in Syria which could take part in peace talks with Damascus.