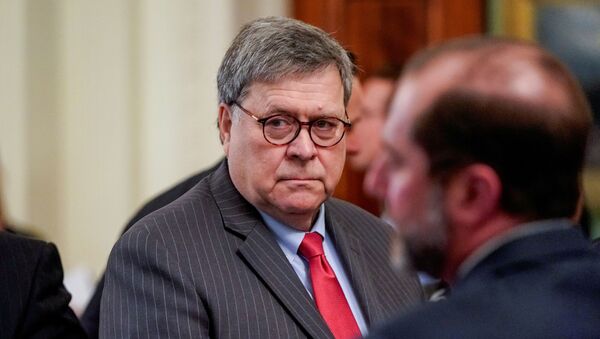 © REUTERS / Joshua Roberts
Subscribe
Attorney General William P. Barr has reportedly told people close to US President Donald Trump that he was considering quitting over Trump’s tweets about Justice Department investigations, according to three administration officials familiar with the matter.

The sources said that Barr had asked Trump several times both publicly and privately to keep quiet on matters of federal law enforcement – requests which Trump had defied. Now administration officials have told the Washington Post that Barr had been sharing his position with advisers in hopes the president would get the message through them. “He has his limits,” said one person familiar with Barr’s thinking, speaking on the condition of anonymity.

The reports come after Barr’s interview last week with ABC News, where he said Trump's tweets on pending criminal cases make it "impossible" for the attorney general to do his job. The US President, however, didn’t respond to the criticism, telling reporters that he has “total confidence” in the attorney general and that Barr “is doing an excellent job, he is a strong guy.”

Barr came under fire for overruling a recommendation to send former Trump campaign aide Roger Stone to prison for up to 9 years, prompting the four prosecutors assigned to the case to withdraw. Stone was convicted for lying to Congress about his communications with WikiLeaks and witness tampering. Trump had slammed the initial recommendation and then after the reduction of the proposed sentence, applauded Barr’s intervention, sparking Democrats’ demands for a probe of the attorney general’s actions.