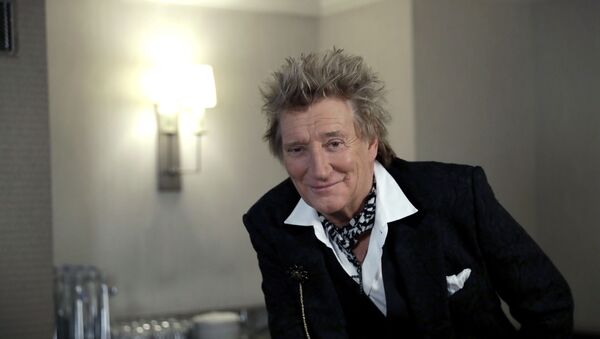 Following the altercation, which apparently took place on New Year’s Eve, the 75-year-old rock singer was charged with simple battery. He pleaded not guilty; the hearing is due on Tuesday, 18 February.

Rod Stewart, the famed British rock singer, has been filmed doing what appears to be a Nazi salute prior to an altercation with security guards at a Florida hotel, according to CCTV footage published by the Daily Mail.

The incident reportedly happened at the luxury Breakers Palm Beach resort in Florida on December 31. Rod is said to own homes in Palm Beach and in California.

A man in a gold jacket, believed to be Rod Steward, can be seen approaching two men in suits, presumably security guards.

The man is filmed raising an outstretched right arm, his left arm above his mouth, in what looked like a Nazi salute.

A man in a gray suit, thought to be Rod's son Sean, then comes over and shoves one of the guards. The 'Maggie May' singer then punches the guard before onlookers separate them. There have been no comments from the Stewarts on the incident.

Local media reported in early January that the altercation occurred after they were denied access to a private kids' area at the hotel.

Florida-based channel WPTV has cited a police report from the Palm Beach Police Department as saying that Rod, 75, and Sean, 38, got “loud” and Sean stood “nose-to-nose” with the security guard.

Then he allegedly “forcefully push [ed]” the guard backward, and Rod punched him, the affidavit read.

Rod and Sean Stewart have been charged with simple battery, but reportedly plead not guilty. The court date is scheduled for Tuesday, February 18.