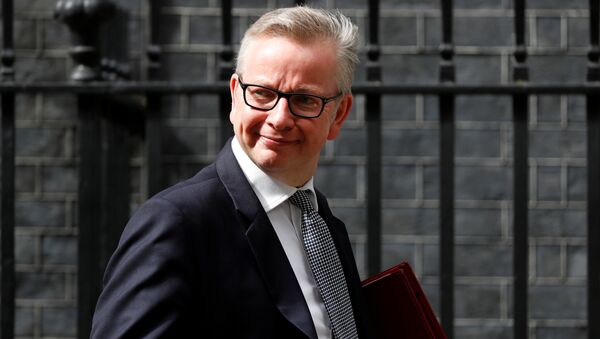 © REUTERS / Stefan Wermuth
Subscribe
Lilia Dergacheva
All materialsWrite to the author
Chancellor of the Duchy of Lancaster Michael Gove has outlined the repercussions of the EU withdrawal for businesses, admitting though the UK has sufficient time to come to grips with all possible changes.

Michael Gove has informed companies trading with the EU that there will be border checks for “almost everybody” after the transition period expires, The Times reported.

The mentioned checks are expected to be on food, goods of animal origin, etc. while customs declarations and mandatory safety and security certificates will be required for all imports.

“You have to accept we will need some friction. We will minimise it but it is an inevitability of our departure", he told an audience at a Cabinet Office event called “Preparing Our Border for the Future Relationship".

He acknowledged the “significance” of change, “but we have time now to make that change", Gove assured.

“Frictionless trade has been kicked to the touchline. This was a big dose of realism. It’s going to be really costly for business", Elizabeth de Jong, UK policy director of the Freight Transport Association, told the Financial Times after meeting Gove.

The comments come as Boris Johnson ordered officials to draw up a legal draft of a Canada-style deal to prevent Brussels from dictating the terms.

The trade accord inked by Canada and the EU, envisaged the removal of 98 percent of tariffs.

However, the EU has hinted that the conditions for Britain will be different as it wants the UK government to follow specific EU laws. Ottawa, for its part, okayed a commitment not to jeopardise workers’ rights at the time the agreement was signed.

The prime minister has asked for treaty texts to be prepared well in advance, in order to work out an effective roadmap for negotiations that will start in March.

This is to try to ensure that the talks focus on British proposals, unlike under Theresa May, when Whitehall mistakenly allowed Brussels to dictate everything.

There has emerged some inside information about what terms Britain is currently weighing.

Yesterday, a picture of a briefing paper carried into Downing Street, reportedly revealed the UK government’s negotiating stance; that the EU should sign up to “permanent equivalence” for financial services, so that British entrepreneurs can maintain access to the European market for “decades to come".

Post-Brexit Trade-Offs Will Be Impacted Not by Economics of the Situation, But by Politics - Prof

The European side has also kicked off preparations for the upcoming trade talks. Last week, the European Commission published a draft negotiating mandate for Michel Barnier that is up for approval by European governments in the coming days. The proposal gives priority to the EU courts and “Union law” which is expected to oversee the UK’s industrial and business policies.

Now that almost half a century of Britain’s membership in the EU formally ended at 11 p.m. on 31 January, the clock has started ticking for a new deadline - 31 December 2020, when the UK, the EU, and separate European countries will have to come to terms on new trade arrangements.