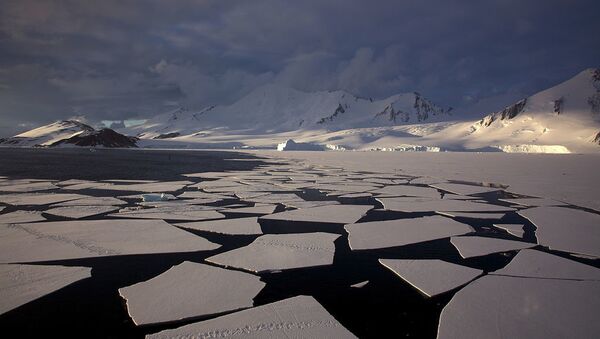 The glacier in question is roughly the size of Florida and is melting at a fast pace, making a sizeable contribution to the global sea rise.

Scientists working in Antarctica have recently made a peculiar discovery in the vicinity of the Thwaites Glacier in Antarctica.

According to Live Science, having deployed a submersible robot called Icefin to the underbelly of the so called "Doomsday Glacier" which earned its moniker due to being one of the fastest melting glaciers in the region, the researchers have determined that the water temperature in the area where the ice meets the sea is about 2 degrees Celsius above the normal freezing temperature.

"Warm waters in this part of the world, as remote as they may seem, should serve as a warning to all of us about the potential dire changes to the planet brought about by climate change," David Holland, a lead researcher on the expedition and director of New York University’s Environmental Fluid Dynamics Laboratory, said as quoted by the New York Times.

In order to accomplish this feat, the team had to drill a 700-meter deep hole through the glacier in order to get the robot to its destination, with Britney Schmidt, lead scientist for Icefin and an associate professor of Earth and Atmospheric Sciences at Georgia Tech, stating that the submersible "represents a new way of looking at glaciers and ice shelves".

"For really the first time, we can drive miles under the ice to measure and map processes we can't otherwise reach. We've taken the first close-up look at a grounding zone. It's our 'walking on the moon' moment", Schmidt explained.

Twaites Glacier, whose size roughly equals that of Florida, is now melting “at an increasingly fast rate”, with its melt already accounting for about 4 percent of the global sea rise, Live Science notes citing Georgia Tech.

"We know that warmer ocean waters are eroding many of West Antarctica's glaciers, but we're particularly concerned about Thwaites," said Keith Nicholls, UK lead on the science team and an oceanographer with the British Antarctic Survey. "This new data will provide a new perspective of the processes taking place, so we can predict future change with more certainty."