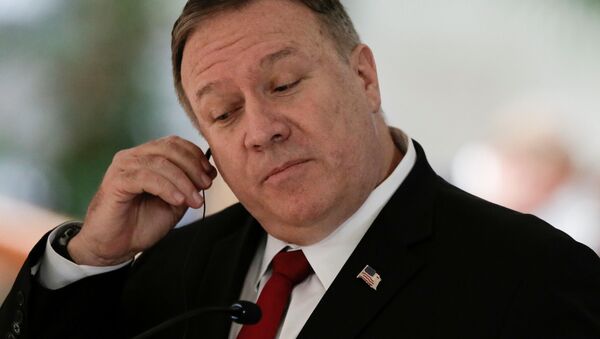 Oleg Burunov
All materialsWrite to the author
Earlier this month, Eliot Engel expressed his frustration over the US Secretary of State’s unwillingness to appear before a House Foreign Affairs Committee to clarify why Washington killed a top Iranian general.

US House Foreign Affairs Committee chairman Eliot Engel announced on Tuesday, 28 January, that Secretary of State Mike Pompeo had agreed to testify on Iran before a panel.

“I spoke with Secretary Pompeo today, who has committed to appearing before the Foreign Affairs Committee to testify at a hearing on Iran, Iraq, war powers and related topics—separate from our annual budget hearing,” Engel said, adding that he would announce a date for the hearing “soon”.

The State Department has not commented on the matter yet.

Engel’s announcement comes a few days after he invited Pompeo to appear before the committee on Wednesday, warning in a  letter that he was “prepared to use all legal means to ensure [his] attendance”.

In the letter, Engel said that the hearing’s goal is to let the Trump administration clarify on a drone strike that killed a top Iranian general earlier this month and on Washington’s so-called maximum pressure campaign against Tehran.

Engel added that his committee is also expected to ask Pompeo about the future of US efforts against Daesh* after the airstrike which killed Qasem Soleimani, head of Iran's Islamic Revolutionary Guard Corps’ elite Quds Force. The Wednesday hearing was finally postponed.

Engel ‘Frustrated’ Over Pompeo’s Reluctance to Testify on Iran

A couple of weeks ago, the committee chairman said that he was “disappointed and frustrated” about the fact that Pompeo will not appear before the committee “tomorrow”  due to an official trip to California.

Engel said that each passing day raises new questions about the US strike that killed Soleimani, including whether there was an imminent threat - as the Trump administration had claimed - and what the legal justification was for such a move and what the path forward is.

“With the wildly muddled explanations coming from the administration, the Secretary should welcome the opportunity to make the case and answer questions before the American people,” Engel pointed out.

He spoke shortly after the Democrat-dominated House of Representatives adopted a resolution to limit Trump's powers to carry out further military action against Iran without prior congressional approval.

Relations between Iran and the US significantly worsened after POTUS ordered the killing of Soleimani and Tehran retaliated by launching ballistic missiles at two bases in Iraq housing US troops.

While Trump and the State Department accused the Quds Force commander of harbouring “imminent” plans to attack Americans, Tehran condemned Soleimani’s killing as an act of terror.

US-Iranian relations have been deteriorating since Washington’s unilateral withdrawal from the 2015 Iran nuclear deal, also known as the Joint Comprehensive Plan of Action (JCPOA), on 8 May 2018. The White House went on to reinstate harsh economic sanctions on Iran, which in turn announced in May 2019 that it had starts suspending its JCPOA obligations.