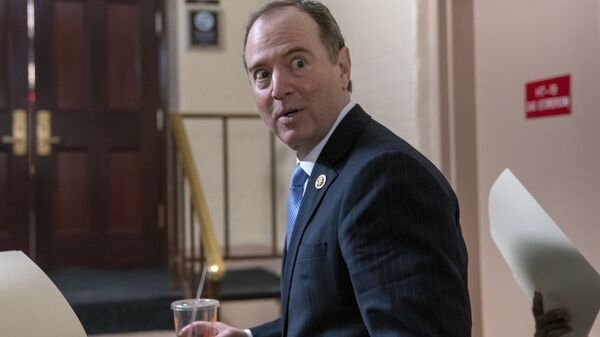 Democrats rushed to stand behind Schiff, referring to his claim that GOP senators' heads would be "on a pike" if they vote against Trump, saying that it was a manufactured move to point fingers at Democrats and draw attention away from the impeachment trial.

Democratic senators are hitting back at the GOP after House Intelligence Committee Chairman Adam Schiff (D-Calif) sparked discontent among the Republican senators for his reference to a controversial statement by CBS News that the GOP would lose their heads if they step against President Trump in the impeachment trial, as an anonymous "Trump confidant" told CBS.

One of the most emotional responses was given by Sen. Dick Durbin (D-Ill.), who called the US president's residence "the most dangerous place in America" because he would chop off the head of any dissident and bury them in horrible tweets.

"The most dangerous place in America, maybe in Washington, is to stand by the exit door at the White House because when you fall out of favor with this president, he lops off your head, throws your body in the snow and buries you in vicious tweets", Durbin said about the GOP's response.

Sen. Jon Tester (D-Mont.) also supported Schiff, saying that "in some cases, people are just looking for excuses", while Sen. Chris Murphy (D-Conn.) tweeted that the Republicans were just trying to distract attention from alleged wrongdoing on the part of the US president.

Let’s be clear - Come hell or high water Republicans were going to find something the House managers said that outraged them:

(1) to get the media to be distracted from the substance ✅

(2) to justify voting against he managers’ case w/o having to deal w the merits ✅ https://t.co/xOJMjvlTme

Schiff's closing remarks sparked a heavy backlash from the Republican senators, including even those considered possible Dem swing votes in the impeachment trial. Sen. Susan Collins (R-Maine) was spotted shaking her head and say "that's not true", while Sen. Lisa Murkowski (R-Alaska) said it was the moment when Schiff "lost her".

On 19 December, the House of Representatives voted to impeach President Trump for abuse of power and obstruction of Congress over allegations that Trump withhold aid to Ukraine as he asked Ukraine's President Volodymyr Zelensky to investigate Joe Biden and his son for purported corruption, and over his refusal to cooperate with the Democrat-instigated probe.

Trump has repeatedly dismissed the impeachment efforts as "another witch hunt" designed to reverse the outcome of the 2016 election.