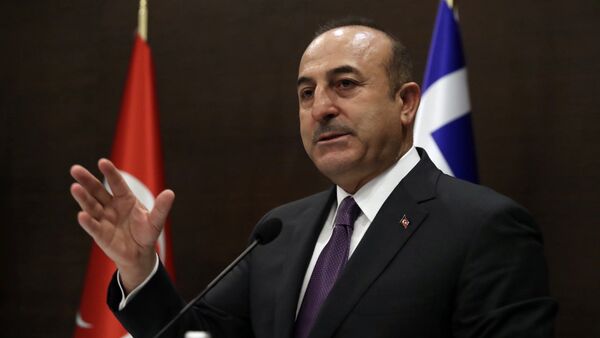 © AP Photo / Turkish Foreign Ministry via AP, Pool
Subscribe
Turkish President Recep Tayyip Erdogan said in early January that Turkish troops were already on their way to Libya to support the internationally recognised Government of National Accord at its request. He, however, clarified on Monday that there were only military advisers on the ground.

Turkish Foreign Minister Mevlut Cavusoglu says that Ankara will no longer send military advisers to Libya and will instead commit to international efforts to reconcile the parties to the conflict.

Sputnik: Do you know the date of the next conference on Libya in Berlin that is supposed to be in February at the ministerial level?

Mevlut Cavusoglu: I think the first week of February. But we have to get this date from Germans, from Heiko Maas. I think he's coordinating this with other ministers that want to participate. We have already supported this idea to have a follow-up meeting.

Sputnik: Are you going to send more military advisers to Libya?

Mevlut Cavusoglu: No. We all agreed that as long as truce, ceasefire is respected, nobody will send any additional advisors or troops or mercenaries from any neighboring countries and no more additional personnel. everybody committed to that.

Sputnik: Are you going to discuss at the next ministerial on Libya how to implement the arms embargo on which the countries agreed in Berlin?

Mevlut Cavusoglu: There is a UN Security Resolution on embargo and also sanctions on Libya, it is very clear. At the same time, the UN Security Council Resolution 2259 calls on the member states to support the national government accord, I mean, the Sarraj government, to stabilize the country and also to disengage with other actors, which mean Haftar.

But yes, the main issue and criteria is ceasefire, truce. As long as it is respected by everybody, we will not talk about sanctions on Libya or other countries, we will instead focus on the political process and how to accelerate the process.

Sputnik: Next week in Geneva there will be the meeting of the 5+5 military committee on Libya. What do you expect from it? Will they actually talk to each other?

Mevlut Cavusoglu: Haftar for a long time didn't nominate his names. Sarraj did from the beginning. This is also what we put on the joint statement together in Moscow after he [Haftar] didn't sign [the agreement].

Libya's GNA 'Cautiously Optimistic' About Haftar's LNA Honouring Berlin Agreements - Leader
This military committee will be so important or can play a crucial role to sustain the ceasefire and also to define the confrontation lines between the two sides. But overall, it could be also a good confidence-building measure between Haftar and Sarraj side.

The first meeting is of course important. We supported that initiative. I hope it will work. Libyans should start working together instead of staying in different buildings or different rooms. They should get together and work together for a sustainable peace, ceasefire and a lasting political solution.

Should the Libyan process be organized like the Astana process? With supervision from Turkey and Russia, for example.

We have already started this. First, it was in Moscow, then in Istanbul, so it's kind of a similar initiative that we started with Russia.

Sputnik: Do you want to send some observers for the military committee in Geneva?

Mevlut Cavusoglu: We prefer to let them do it between themselves. In future, if they need assistance or a mediation, maybe the U.N. should be more engaged in that, and the if the UN needs the support or assistance of the actors like us to that end, then we can extend to this. For instance, together with Russia we spent a lot of efforts to establish a constitutional committee for Syria.

It is there now, even though the second meeting was not very promising because of the unacceptable conditions from the regime, but since the committee has been functioning, we should let the Syrians draft the constitution or amend the constitution for their own country. If they need any expertise from us or from international community, then we can extend it. So, also in Libya, we prefer that this 5+5 military committee does something for a sustainable ceasefire and then also discusses other issues.

Sputnik: The EU is now considering introducing new sanctions against the Turkish businesses and individuals for the Turkish gas exploration off Cyprus. What is your reply to that?

Mevlut Cavusoglu: For example, there are also sanctions on Russia or against Russia. But many EU member states didn't respect the sanctions and have been engaging with Russia, which is good.

From the beginning, as a negotiating country, we told them that we are against those sanctions and Turkey will not join because candidate [for EU membership] and negotiating countries are also expected to join the statements or decisions of the European Union.

Boris Johnson Says UK Troops Could be Tasked With Peacekeeping in Libya if Ceasefire Struck
The EU should actually play a balanced and objective role on issues. Just for the sake of solidarity the EU is in condition of supporting its member states only. But it doesn't solve the problem. Instead of making statements or decisions against Turkey, they should find the way to settle this problem and they can be an honest broker.

We proposed to the EU to be an honest broker until this problem is resolved. The EU is obliged to defend the rights of Turkish Cypriots as well, not only Greek Cypriots, but unfortunately they have not been honest, they show double standards and hypocrisy. In particular on the Cyprus issue we asked the EU and other actors to find a solution to guarantee the rights of the Turkish Cypriots on the hydrocarbon reserves, which has been denied by every side, including Greek Cypriots.

But they [the EU] haven't done anything to guarantee their rights. So on unilateral activities like drillings or exploitation or exploration, I think, they should learn how to share and how to work together. The Turkish side is ready for that. This is also what we discussed, the two leaders, President Erdogan and Putin, and in the future I think there is a room for cooperation between Turkey and Russia as well.

000000
Popular comments
Great for Russia and Turkey but tell me how this helps the secular Libyan people ,Greece and Cyprus's maritime property, International law and European security when Erdo already is guilty of weaponising Headchopping Jihados he sends into Europe? All coming from a Lover of Russia like me.

Dolce Vita
23 January 2020, 14:15 GMT
000000
There is no need to guarantee anything for the Turkish Cypriots. Cyprus is still occupied by Turkey as per UN statements etc. Any loyal Turkish of Cyprus would have moved to free Cyprus or be rebelling against the Occupiers. It is laughable that Cyprus should share anything with collaborators and traitors. In no other country or war are assets held and shared with such! Tell me are the Syrians saving assets to give to the jihadis and Turks invading Afrin,Idlib and NESyria? Get out of here before you are thrown out with kicks to your arse!