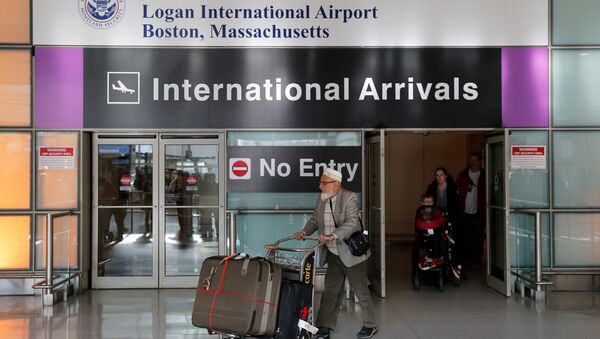 The Trump administration plans to add seven more countries to its travel ban list, namely Belarus, Eritrea, Kyrgyzstan, Myanmar, Nigeria, Sudan and Tanzania, according to a report by the Wall Street Journal, which cited two administration officials who have seen the list.

According to the report, not all of the countries would face blanket bans on US travel. Some of the countries could have restrictions placed on certain visa types, including business or visitor vias. The unidentified administration officials also stated that the list isn't final.

US President Donald Trump on Tuesday confirmed to the Wall Street Journal that he is trying to add more nations to the travel ban but declined to name the countries.

"The travel ban has been profoundly successful in protecting our country and raising the security baseline around the world. While there are no new announcements at this time, common sense and national security both dictate that if a country wants to fully participate in U.S. immigration programs, they should also comply with all security and counter-terrorism measures — because we do not want to import terrorism or any other national security threat into the United States," White House spokesperson Hogan Gidley is quoted as saying Tuesday by Politico.

In a Friday statement during a Homeland Security Experts Group event, Acting Homeland Security Secretary Chad Wolf noted: "For a small number of countries that lack either the will or the capability to adhere to these criteria, travel restrictions may become necessary to mitigate threats," Politico reported.

On January 27, 2017, one week after taking office, Trump first introduced an executive order prohibiting entry into the US of foreign nationals from seven Muslim-majority countries, although court challenges forced the administration to modify the ban multiple times. The current version of the executive order, also referred to as travel ban 3.0, bars travelers from seven countries including five Muslim-majority nations — Iran, Libya, Somalia, Syria and Yemen — in addition to North Korea and Venezuela, Sputnik reported.