Columbus May Have Encountered 'Ravenous Cannibals' in the Caribbean 500 Years Ago, Study Claims 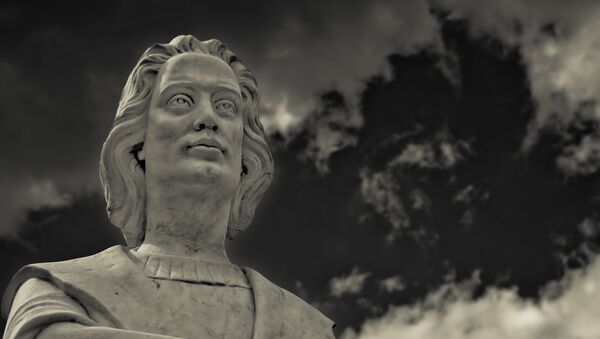 © Flickr / Chris Martino
Subscribe
Christopher Columbus, the Italian explorer and colonizer who made a series of visits across the Atlantic ocean in the late 15th and early 16th centuries which paved the way for European colonisation of the Americas and the Caribbean, is again the subject of historical revisionism regarding his initial descriptions of the inhabitants as cannibals.

A new study suggests that Christopher Columbus may have come into contact with "cannibal marauders" during his trip to the Caribbean in 1492, despite previous beliefs that the stories were myth invented to support the explorer's actions.

Research posted by Scientific Reports on Friday identified a group called the 'Caribs' - a possible cannibalistic South American tribe - who invaded the Greater Antilles (Jamaica, Hispaniola and the Bahamas) in 800 A.D., centuries prior to what has been accepted in history books.

"I've spent years trying to prove Columbus wrong when he was right: There were Caribs in the northern Caribbean when he arrived. We're going to have to reinterpret everything we thought we knew", noted William Keegan, a curator of Caribbean archaeology at the Florida Museum of Natural History.

The study outlines the initial image which Columbus described in his ventures to the Caribbean:

"The defining image of the Columbian encounter is ravenous cannibals descending upon unsuspecting peaceful Arawak villages, whence they ate the men and took the women as wives".

Researchers observed some of the skulls of the early inhabitants, a group which terrorized the native Arawaks and which Columbus had originally identified as 'Caniba'.

The Caniba were known for abducting local women and eating men. Eventually, Columbus' Spanish successors adopted the name 'Caribe' to describe them.

Columbus’ descriptions of Caribbean cannibals have long been dismissed as myths. But a new study of skulls gives credence to his claims - and upends what we thought we knew about the region.
Story: https://t.co/A3WKYy3NVA pic.twitter.com/dU6tHUGYcs

​Carib skulls were easily identifiable due to the practice of 'skull flattening' which changed the shape of their craniums, according to the study.

The study's lead author, Ann Ross, a professor at North Carolina State University, observed the biological components of over 100 skulls identified as having originated from between 800-1542 A.D., and recognized three separate groups, including routes of migration. Ross described the scientific revelations as "really stunning".

Ross noted the importance of the findings, which suggests that the Caribbean's earliest settlers did not only arrive from Columbia, Yucatan, and Venezuela, as early pottery previously seemed to indicate, but from the Bahamas and Hispaniola, as well.

000000
Popular comments
The hurricanes these days cause no end of tragedy out there over the pond, but at least they circulate fresh air a little.