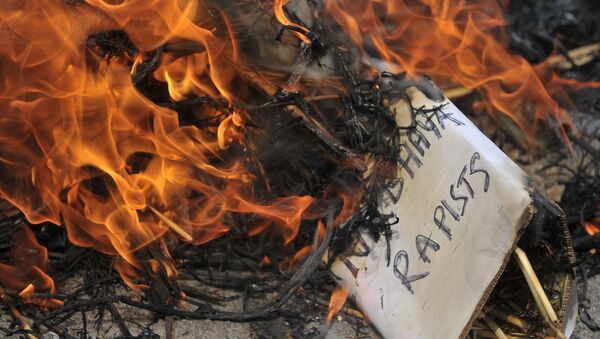 New Delhi (Sputnik): Earlier this week, a court in Delhi handed down the death sentence to four convicts found guilty of the rape and murder of a 23-year-old woman in a moving bus in Delhi. In 2017, the Supreme Court described the brutality of the crime committed against the girl as “humanly inconceivable”.

Gradually exhausting the legal remedies available to seek relief from the death sentence given for the gang rape of a Delhi woman, one of the four convicts on death row - Vinay Kumar Sharma – filed a curative petition in the Supreme Court on Thursday.

A curative petition is a legal remedy that facilitates the review of a court's final verdict. The plea comes two days after the court sentenced four convicts in the case, Akshay, Pawan Gupta, Vinay Sharma, and Mukesh Singh to death by hanging after a long wait of seven years.

The execution is scheduled for 22 January at 7 a.m. local time.

Rejoicing after hearing the final verdict Nirbhaya’s mother said: “It has taken 7 long years, running from pillar to post and knocking every possible door but finally I can say my daughter has been served justice. I have smiled after so long, the judgement is every woman’s victory".

The sentence was pronounced on 7 January 2019, leaving the convicts with 14 days to file a mercy petition with Indian President Ram Nath Kovind. This would be the final legal remedy available to the convicts.

The infamous gang rape by six people, which occurred in 2012 in Delhi, made headlines across the world and shook the nation. The crime involved the rape and fatal assault on “Nirbhaya” (the name given to the victim) on the night of 16 December in the Munirka area of southern Delhi. It triggered a nationwide outcry with people coming out onto the streets demanding safety and security for women in the country.

Ram Singh, the key accused, died while in custody. Another was a juvenile at the time the crime occurred and was sent to a reformatory for three years as per Indian law. He served the term and later walked free. The remaining four - Akshay, Pawan Gupta, Vinay Sharma, and Mukesh Singh - are set to be hanged on 22 January.