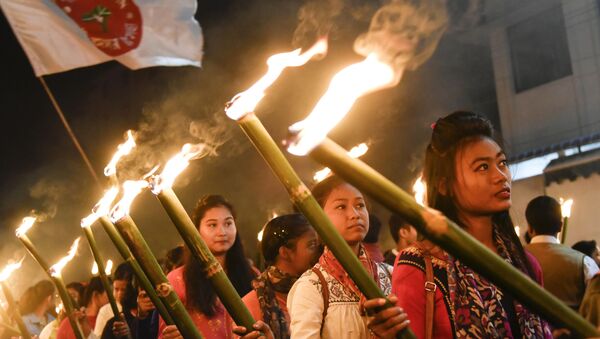 New Delhi (Sputnik): A lot of people in India are up in arms against the contentious Citizenship Amendment Act (CAA), which allows granting citizenship to non-Muslim illegal immigrants from Pakistan, Afghanistan, and Bangladesh. It has led to violent clashes between police and protesters during demonstrations.

Expressing belief in the Prime Minister Narendra Modi-led government’s policies, an inter-faith delegation met India’s Minister of State for Home Affairs G. Kishan Reddy on Wednesday evening to show solidarity with the government at a time when the country is facing public unrest over the Citizenship Amendment Act (CAA).

The delegation members have urged the people to guard themselves against misinformation meant to destabilise India’s foundations of mutual respect and acceptance.

The statement issued by the central government said the delegation had unanimously affirmed that the CAA concerns foreigners and that no Indian, from whichever religion, caste, colour or creed, has anything to fear.

The delegation stressed that the law has been cleared on “humanitarian grounds” for those who fled persecution from the three countries – Pakistan, Afghanistan, and Bangladesh – and had migrated to India for solace and safety.

Although the delegation emphasised the humanitarian nature of the legislation, the opposition political parties in India and various activists have slammed the law for being discriminatory towards Muslim immigrants, as they are excluded from the list. Granting citizenship to people on the grounds of religion in a secular country like India has also been questioned by various political parties.

However, Indian Home Minister Amit Shah has already rejected this allegation, saying Indian citizens belonging to any religion have nothing to fear.

Terming the legislation “rational” and emphasising principles of Dharma (religion) and Ahimsa (non-violence), the delegation said: “It is unacceptable that one protests against a decision that aims to alleviate the suffering of those uprooted families”.

The delegation also requested to meet Prime Minister Narendra Modi and Home Minister Amit Shah with their message of peace and solidarity.

The country has witnessed widespread protests against the CAA, which allows illegal immigrants who are Hindus, Sikhs, Parsis, Christians, Buddhists, and Jains, excluding Muslims, to obtain Indian citizenship if they arrived in India on or before 31 December, 2014.

More than 2,000 people have been arrested and nearly 5,000 others detained during anti-CAA protests at different places of the country.