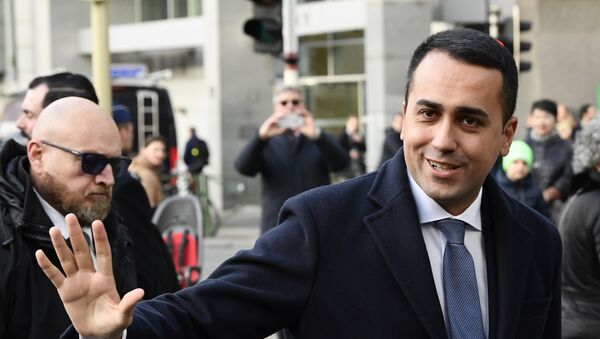 ROME (Sputnik) - Situation in Libya is dangerous not just in terms of migration, but also in terms of terrorism, Italian Foreign Minister Luigi Di Maio said.

"Libya now poses risks for Europe, not only in terms of migration but also in terms of terrorism", Di Maio said on Tuesday, following a meeting with his colleagues from Germany, France, and the United Kingdon, as well as with the EU foreign policy chief Josep Borrell in Brussels.

The foreign ministers of France, Germany, Italy, and the United Kingdom, together with Borrell, also called for an immediate cessation of violence in Libya.

"Today's meeting was supposed to be held in Libya, but it’s important that it took place. From tomorrow, the European Union will change the approach in initiatives", Di Maio stated, as quoted by the Italian Askanews agency.

Libya has been torn apart between the two rival administrations since 2011 when its long-time leader Muammar Gaddafi was overthrown and killed. The Libyan National Army (LNA), led by Field Marshal Khalifa Haftar, has been trying to seize control over the country's capital of Tripoli, currently controlled by the rival UN-backed GNA, since April 2019.