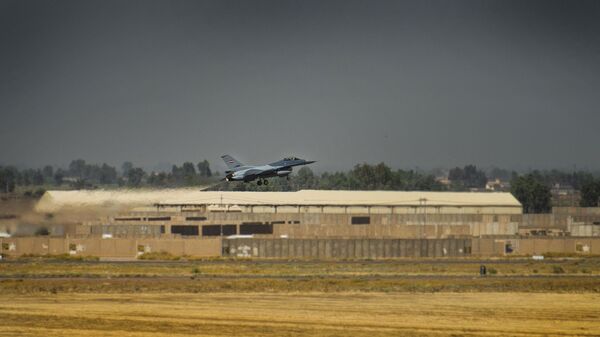 Ilya Tsukanov
All materialsWrite to the author
The attacks on US facilities in Iraq began Saturday, the same day that mourners gathered to pay their last respects to Iranian Revolutionary Guard Quds Force Commander Qasem Soleimani, who was killed in a US drone strike on Friday.

The first unconfirmed footage and photos from the scene of the rocket attacks on the US Embassy in Baghdad and the nearby Balad Air Base north of the Iraqi capital have emerged online, showing damaged vehicles and ruins, along with multiple helicopters swarming in the air over the city.

Looks like that mortar never hit the Green Zone, but fell in Jadriya to the south. 3 people injured. pic.twitter.com/Llomb3UyWI

There are conflicting reports about where exactly the rocket aimed at the heavily fortified Green Zone, where the US Embassy is located, came down, with some sources reporting that it landed inside the Green Zone, about a mile north of the Embassy complex, while others say it landed in the nearby neighbourhood of Jadriyah, south of the Green Zone on the opposite bank of the Tigris River.

The Balad Air Base, situated some 80 km north of the Iraqi capital, was reportedly hit by two or three rockets launched by a BM-series mobile rocket artillery launch system. In addition to hosting US troops, the base is also home to Iraqi Air Force F-16/CD fighter aircraft.

No casualties have been reported from the air base attack.

Saturday's attacks came a day after a US airstrike at Baghdad International Airport killed Iranian Quds Force Commander Maj. Gen. Qasem Soleimani and a senior Iraqi Shia Popular Mobilisation Forces commander. In his capacity as commander of the Quds Force, Soleimani engaged in operations to support Iranian allies in the region. These included military and tactical planning assistance to Iraqi Shia militias in their effort to cleanse Iraq of Daesh (ISIS)* between 2014 and 2017. Justifying the commander's killing, President Trump claimed that Soleimani was plotting "imminent and sinister" attacks on Americans. The State Department accused him of involvement in the planning of the December 27 rocket strike on a US military base in northern Iraq, which left one US civilian contractor dead and several US troops injured.