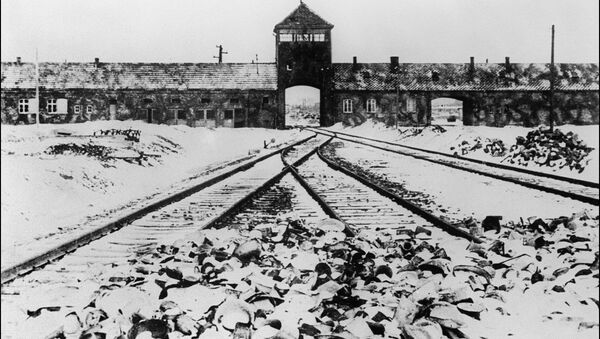 The performance was attended by a local mayor, who then held a speech about the kids’ duty to protect "Latin Christianity" against "traitors" and the "dangers" that the modern West faces.

Students at a primary school in the eastern Polish city of Labunie staged a shocking performance depicting the horrible deaths in the Auschwitz concentration camp.

The video, published by Tygodnik Zamojski, shows schoolchildren wearing SS uniforms with swastika armbands, while others, who wore grey-striped prison outfits, collapse on the floor with smoke engulfing them – representing the deaths in the gas chambers.

At the same time, one of the guests, a Polish woman whose parents were murdered in the concentration camp, told the children after the show that their country deserved reparations from Germany.

​The whole performance was criticised by the Auschwitz Memorial staff as inappropriate.

The idea of dressing up students this age in SS uniforms and staging death scenes with them is simply bad. Adults who organized this lack of elementary sensitivity needed to educate children with such a tragic and challenging history. https://t.co/u6DykTRuYc

Many Twitter users were also confused or appalled by the performance as well.

They did it again. (2nd time there's been a child pageant about Auschwitz in Poland.) pic.twitter.com/E3Cbabssl1

​​The re-enactment was held to commemorate the Children of Zamosc, after whom the school was named - as thousands of young people from the Polish region were deported and killed by the Nazis during WWII.