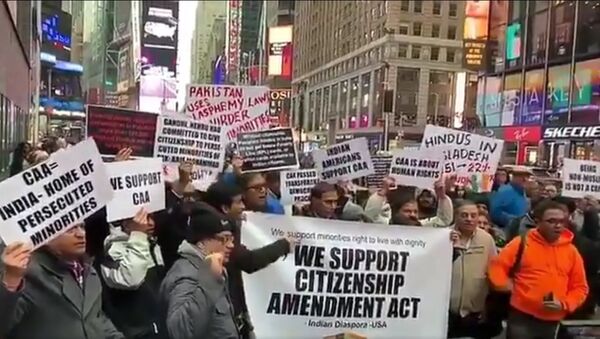 New Delhi (Sputnik): Members of the Indian diaspora held rallies in support of a controversial citizenship law enacted back home. The law, which seeks to grant citizenship rights to illegal immigrants from three neighbouring Islamic countries, has left out Muslims from its purview.

There have been widespread protests in India against the law, some even violent resulting in the deaths of more than 20 people, with dozens injured. Hundreds of protesters have been arrested by security forces on various charges.

As videos of the rally in support of the law surfaced on social media platforms, several Twitter users agitating against the law slammed these non-resident Indians and asked them if they would like to return to India and contribute to building India.

Would anyone of them leave US and come back immediately to India and contribute to Rashtranirmaan???

They won't even get their WiFi here 🙄

When more than 200 people protested against CAA-NRC in New York, ANI made zero posts on that

The 'Overseas Indians' who Gathered at Times Square to show support for #CitizenshipAmmendmentAct
Should Come to India to PROVE their INDIAN CITIZENSHIPS First !!!

And Should answer why they left their motherland which they claim to love ? https://t.co/oe6pbCi7te

NRI are the worst of its kind...... If they are so supportive, why are they giving us lectures while enjoying luxurious healthy good life in Liberal countries where they have freedom of everything.
Come here, live with us just for 3 months, let's see how supportive you r 😡😠

However, several others backing the CAA were left overwhelmed by the overseas support for the law.

Members of Indian diaspora came together at Times Square in support of #CitizenshipAmendmentAct.

Indian-Americans hold demonstration at Times Square in US in support of Citizenship Amendment Act.#IndiaSupportsCAA #TimesSquare pic.twitter.com/GGc7O7JYRX

In past few days, rallies both in favour and against CAA were witnessed in different parts of America, Australia, and the UK.

Several Indian diaspora organisations in the US have come out in support of the CAA holding marches in different cities, including Seattle, Austin, Dublin, Houston, and Raleigh. The rallies are being organised to educate people about misinformation and myths relating to the law.

On the other hand, students held peaceful protests against the law in the US cities of Chicago and Boston, condemning the Indian government’s egregious behavior and the police’s role in violence at Indian universities.

The citizenship law seeks to grant citizenship to illegal immigrants from six religious minorities – Hindus, Parsis, Jains, Christians, Buddhists, and Sikhs, from Afghanistan, Bangladesh, and Pakistan, if they arrived in India prior to 2015. It, however, doesn't extend the same treatment to Muslims.