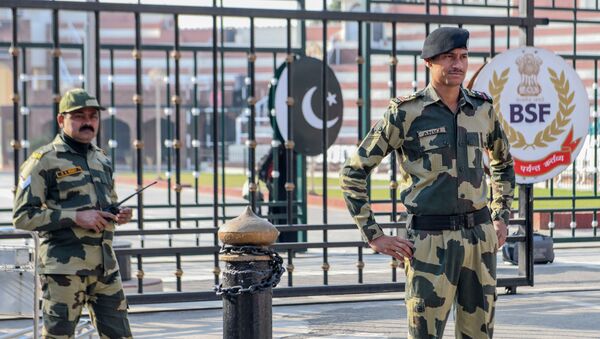 New Delhi (Sputnik): India’s Uttar Pradesh, known to be communally sensitive, has witnessed large-scale violence over the Indian government’s new citizenship law, leading to clashes between the protestors and the police. Nearly 1,100 people in the state have been arrested and 19 have lost their lives so far.

Amid a string of videos that continue to emerge on social media, showing either the police or protesters indulging in violence over the citizenship bill demonstrations, a new clip is gaining traction on social media where a cop can be heard asking locals to warn a few protesters, telling them they may return to Pakistan “if they love it so much”.

“GO TO PAKISTAN”
Watch how UP Police speaks the language of trolls.
Meerut SP Akhilesh N Singh can be seen here Speaking to protesters.
How can our police talk like this! #AntiCAAProtests pic.twitter.com/3sYE1G7aYs

“You live in India and yet you sing the praises of Pakistan. Go to Pakistan if you love it so much", the Superintendent of Police in Meerut of the State SP Akhilesh N Singh can be heard saying in the video. The clip, of 20 December protests in the city, comes against the backdrop of scrutiny that the police are facing for allegedly using force on protesters.

The cop further told locals that “if they (the protesters) ever indulge in such an act, their future will be doomed".
The state police have claimed that a few protesters were provoking the police and ran away after chanting pro-Pakistan slogans.
In the clarification video, the cop said three or four protesters had started shouting slogans like “Pakistan Zindabad” (Long live Pakistan) in an already sensitive environment which could have triggered a protest.

“As soon as the police entered the colony, a few protesters started chanting slogans on seeing us and ran away. Why would you run away if you haven’t done any wrong? We don’t have a problem with Pakistan Zindabad, but at least avoid such slogans in a sensitive environment", Singh can be heard saying in the video.

The Meerut Police claimed that they have been subjected to extreme violence and pelted with stones since last Friday. The senior police officer in the state, Prashant Kumar, said that the police exercised exemplary restraint in the situation, however, the choice of words could have been better.
The police in the northern state are facing scrutiny over the alleged use of force against protesters, including opening fire on them. Media reports have pointed out that a few protesters were hospitalised with gunshot wounds.
However, State Police Chief OP Singh has denied allegation saying that the police did not use firearms but only pellets and rubber bullets. Meanwhile, 288 policemen have also suffered injuries in the clashes.