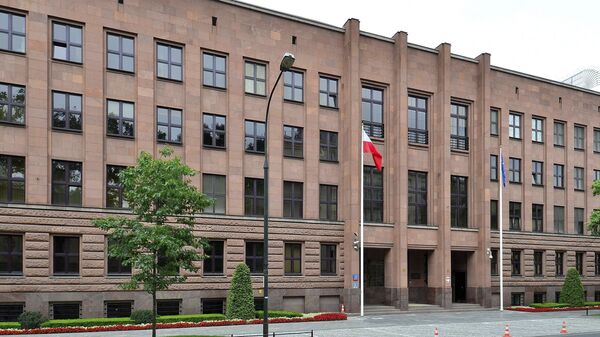 © Photo : Adrian Grycuk
Subscribe
International
India
Africa
WARSAW (Sputnik) – Russian Ambassador to Poland Sergey Andreyev said that he had been summoned to the Polish Foreign Ministry over the remarks of Russian President Vladimir Putin on the Polish foreign policy in the 1930s.

“I have been invited to the Polish Foreign Ministry, I had a conversation with the chair of the Eastern Department,” the Russian ambassador said.

According to Andreyev, the conversation was tough but consistent, with the parties having provided each other with their points of view.

“We were speaking about Russian President Vladimir Putin’s remarks, made first on the sidelines of the CIS [Commonwealth of Independent States] Summit and then at the Defence Ministry's board. We will not let anyone give us lectures,” the diplomat added.

Speaking at the annual extended meeting of the Russian Defence Ministry's board on Tuesday, Putin called Polish Ambassador to Nazi Germany Jozef Lipski a "bastard and anti-Semitic swine," who supported Nazi leader Adolf Hitler and his idea of expelling Polish Jews to Africa "for extinction and extermination."