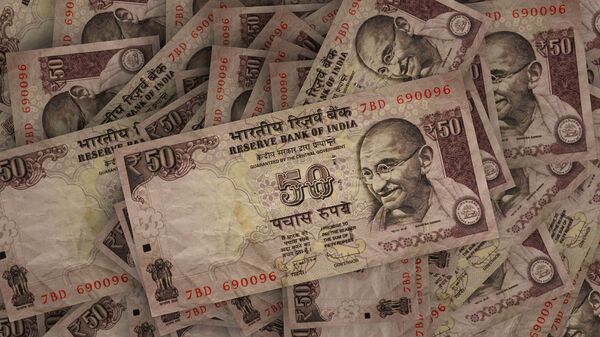 New Delhi (Sputnik): India’s GDP growth slowed to its lowest in the last six years to 4.5 per cent in the July-September quarter of the current fiscal year. Rising inflation and falling growth have forced India’s central bank to lower the growth forecast for the current financial year to 5 per cent from the previous estimate of 6.1 per cent.

From 1.97 per cent in January, retail inflation in India has registered an almost three-fold increase to 5.54 per cent in November. Food inflation also crossed 10.01 per cent in November against 7.89 per cent in October this year.
A top official of the federal finance ministry told Sputnik, “The recent spike in the retail inflation is mainly on account of increase in food price inflation. The government has imposed export restrictions and stock limits to moderate the volatility in the prices of onions, pulses and potato.”
Onion prices went through the roof after September, due to a severe supply shortage of the commodity caused by excess rains in the key onion producing regions of Madhya Pradesh, Maharashtra and Karnataka, among others.
Rising inflation threatens to curb the already slowing Indian economy further, and could hamper the investment scenario. Experts believe with inflation rising, India’s central bank, the Reserve Bank of India will not be able to reduce interest rates, thereby hampering industrial growth.
“India’s November inflation has surged to a 40-month high of 5.54 per cent. This is higher than RBI’s medium-term target of 4 per cent. If inflation continues to rise further, the RBI may continue to pause at the February policy,” said Rahul Gupta, Head of Research at Emkay, a major brokerage and equity research firm.
The peak prices of onions zoomed ten times to over Rs. 200 per kg (about $3) from Rs. 10-20 a few months ago, in many parts of the country. Even though India has started sourcing onions from Afghanistan, Turkey, and Egypt, prices are still almost five times the season’s normal range.