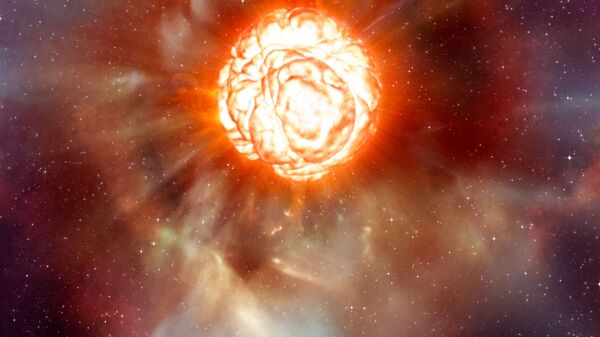 Betelgeuse, one of the largest stars visible in the night sky to the naked eye, has long been in a list of supernova candidates, with scientists now claiming that the time has finally come for us to witness a rare astronomic event.

Astronomers have recently been puzzled by the unusual dimming activity of the semiregular star Betelgeuse – a red supergiant located in the constellation of Orion, which is believed to be 1,400 times larger than the Sun.

Observers from all over the world have rushed to Twitter to share their suggestions of what could have potentially been going on and came to the extraordinary conclusion that Betelgeuse’s unusual activity might be a sign of an upcoming explosion and spectacular supernova event.

#Betelgeuse has dropped to magnitude ~1.5 within recent weeks, the most significant drop of this variable star in decades. Observers report it to be noticable dimmer than usual. See for yourself: it's the red left shoulder star of #Orion, due east after dusk! pic.twitter.com/7MSrzppt52

​Head of Physics at Uppingham School Dr David Boyce said on his Twitter account that the sudden decrease in the star’s brightness was noticeable even to a general observer’s eye and suggested that if it is about to go supernova, then the explosion would give out “more energy” in just a few hours than throughout the millions of years of its existence.

Is #betelgeuse about to go supernova? It has suddenly and rapidly decreased in brightness by a factor of 2 - noticeable to the naked eye. pic.twitter.com/VppN3X7tBL

“Whatever happens it will be worth watching. A supernova within our galaxy is a once in a lifetime spectacle. One as close as #betelgeuse would be one to wake the kiddies up for”, Dr Boyce concluded.

Netizens have been left ecstatic to hear news that they will possibly become witnesses to a rare astronomic event, with Betelgeuse turning into a type II supernova. However, many noticed that while the star is believed to be located more than 600 light years away from the Earth, the event may already have happened in the 1300s.

I love Orion and Betelgeuse. One of my favourite (and easiest) constellations to locate in the night sky. It would be an incredible thing to witness if it goes supernova.

It is an interesting development. A supernova event might already have happened. We just haven't seen it yet! (Google comes up with all sorts of distances. Possibly 600 light years)

Friends, if we're lucky enough to see Betelgeuse go supernova anytime soon, it will have gone supernova over 600 years ago. While the speed of light being finite is limiting, it's truly beautiful because it gives us the *one sure way* to time travel into the past: by looking UP.

Gotcha! Amateur Astronomer Captures Exact Moment Of Supernova Explosion
The blast from Betelgeuse is believed will take around 20,000-100,000 years to reach the Earth, Corey S. Powell claims, and would particularly brighten up our night sky, as well as dramatically change the constellation of Orion. However, it is still not clear when the event will take place or whether it will happen at all.
Newsfeed
0
Access to the chat has been blocked for violating the rules . You will be able to participate again through:∞. If you do not agree with the blocking, please use the feedback form
The discussion is closed. You can participate in the discussion within 24 hours after the publication of the article.
To participate in the discussion
log in or register
loader
Chats
Заголовок открываемого материала