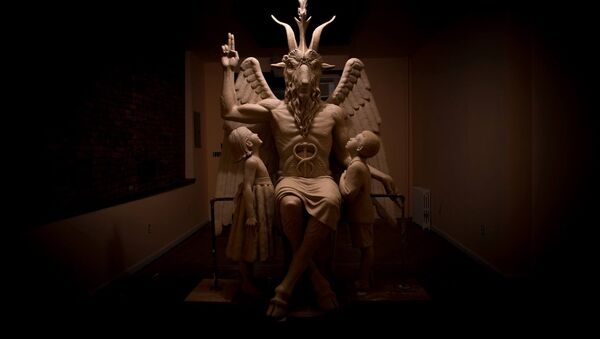 © The Satanic Temple Courtesy Photo
Subscribe
Catholic exorcist Francois Dermine has warned that there is an increase in “aggressive Satanism,” particularly among young people, due to lack of strong role models and the spike in cultural secularism.

According to some religions, an exorcist is someone who can cast out the devil or other demons from a possessed person. Dermine has been an exorcist for the Archdiocese of Ancona-Osimo in Italy since at least 1994.

In an interview with Catholicism-focused news outlet Crux Now, Dermine warned that when young people are exposed to the demonic, such as through video games that promote themes like supernatural beings, they tend to act out violently and aggressively.

“Satanism is getting much more aggressive and also diffused,” Dermine told Crux, warning that the growth in secularism is a contributing factor to the rise in Satanism.

“Secularization leaves a void,” he noted, adding that it is a “sort of spiritual, ideological and also [a] cultural void. Young people do not have anything to satisfy their spiritual and profound needs. They are thirsting for something, and the Church is not attractive anymore.” He also noted that youth no longer go to church “looking for answers,” so they are instead “trying to find something elsewhere,” many times in the “demonic world.”

As an example of Satanism in today’s modern day world, Dermine pointed to a book published in May titled, “A Children’s Book of Demons.” The book, which is targeted to youth between the ages of five and 10, includes images of 20 different demons and highlights the “sigil” or magical symbol for each demon in addition to ways to summon the demons.

“Satanism is not always so explicit, but it is becoming more and more so, and the publication of this book is a sign of this,” Dermine explained.

According to Dermine, getting exposed to demonic ideas at a young age can lead to a “Satanist mentality.”

“They [the youth] risk passing from the culture to the acts. They can become evil themselves very easily,” Dermine noted, also explaining how the “breakdown of the family structure” causes youth to become vulnerable.

“Education of young people is poorer and poorer,” he said. “Couples are collapsing. Children are left alone; they are destabilized, and they don’t have any defenses,” he noted.

“It’s not only a vague fear, it’s a very concrete risk. We must not underestimate this, because violence among young people is becoming more and more diffused … A violent mentality is very dangerous for our society, very, very dangerous … Our society risks collapse if it continues like this,” he added.

The ideological and philosophical ideas rooted in Satanism began with the founding of the Church of Satan in 1966 and have been used by various Christian groups throughout history to explain events such as sexual abuse, murder and cannibalism, despite the lack of evidence to corroborate such claims.

Last year, two girls at Florida’s Bartow Middle School who said they were practicing Satanists had plotted to kill their classmates. Lucien Greaves, cofounder and spokesperson for The Satanic Temple, told Sputnik at that the time that such incidents would not take place if media more accurately represented Satanism.

"In fact, I'm sure it will be established that these girls held no active role in any established form of religious Satanism, the major sects of which today are non-theistic, humanistic and anti-superstitious," Greaves told Sputnik at the time. "Their distorted perspective of what Satanism is, and their apparent supernatural belief in what Satan wants, is almost certainly the product of a Christian upbringing, possibly an attempt at the tired ‘the devil made us do it' defense."

000000
Popular comments
Satanism is alive and well all around the world!