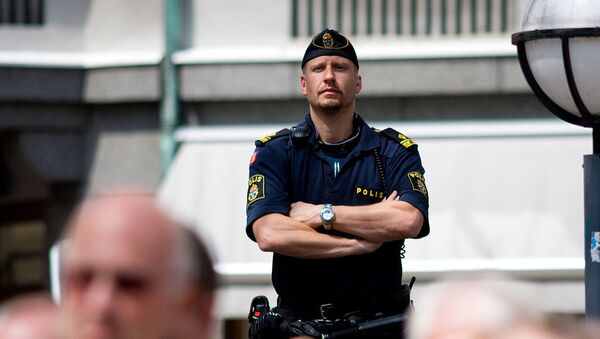 CC BY 2.0 / Håkan Dahlström / A police officer in Helsingborg (Sweden)
Subscribe
According to a report by Linköping University, personnel from Sweden's leading body for crime statistics were summoned to the Justice Ministry to “correct” their reports.

Sweden's Crime Prevention Council (Brå), the Scandinavian country's main authority on crime, has been accused of doctoring its reports to match its bosses' preferences.

According to a study by Linköping University called “It is possible to rely on Brå?”, Brå's reports have been censored or “corrected” due to political pressure.

Linköping University's research team has interviewed over 35 people who have been, or still are, involved in Brå's work in various ways. According to its study, Brå's personnel have on several occasions changed their findings due to demands by their superiors. Furthermore, the report unveils a “silence culture” and “political steering”.

“A number of interviewees testify, among other things, about how Brå's management directly applied pressure on them to change their findings which, for political, ideological or other reasons, were not desirable”, the reported said.

According to the report, staff at Brå was summoned to the Justice Ministry to “correct” their reports.

“If the results were not liked, it meant censorship, manipulation of results, dimming some parts, and highlighting others that were not as sensitive or could show a positive result”, a former Brå employee said in the report.

In recent years, Brå has amassed a lot of crtiicism, not least for having discontinued the practice of mapping out criminals' ethnicity for “ethical reasons”. The most recent mapping of immigrant crime was carried out in 2005, indicating their over-representation, which seemingly interfered with the Swedish authorities' push for mass immigration. Brå has repeatedly denied any link between immigration and crime, despite independent reports pronouncedly drawing this connection.

“Forget everything BRÅ said in the 21st century”, a user tweeted.

​“This scandal is so huge that the government just can't keep their seats after this”, another one said.

​Following the revelation, the Justice Committee has invited the study's authors and Brå's director general for a meeting.

How Swedish Professor's Life Was Destroyed Over Raising Migrant Gang Rape Issue on Twitter
“Very serious allegations and claims are made in the report. Brå is, after all, an expert authority that is expected to deliver facts that objectively reflect society. We need to get to the bottom of this”, Moderate party legal spokesman Johan Forsell told the newspaper Dagens Nyheter. “No matter when it happened and under what political colour, the mere suspicion of influence is serious enough. But that responsibility now falls on Justice Minister Morgan Johansson”, he said.

Brå is a state administrative authority tasked with producing facts about legal statistics in order to facilitate crime prevention and boost social security.

000000
Popular comments
"....the Justice Committee has invited the study's authors and Brå's director general for a meeting." With correction tape in hand.....Soon the study will "more accurately reflect"....."the proper truth".